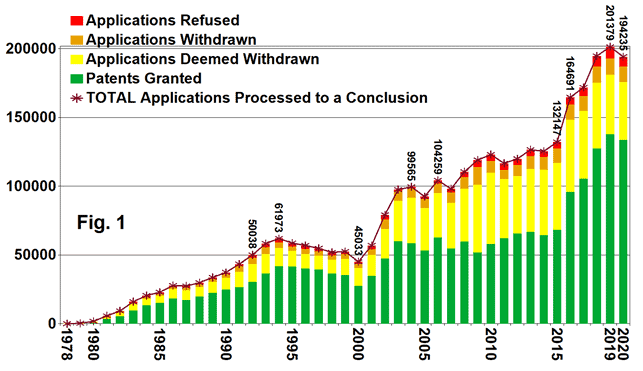 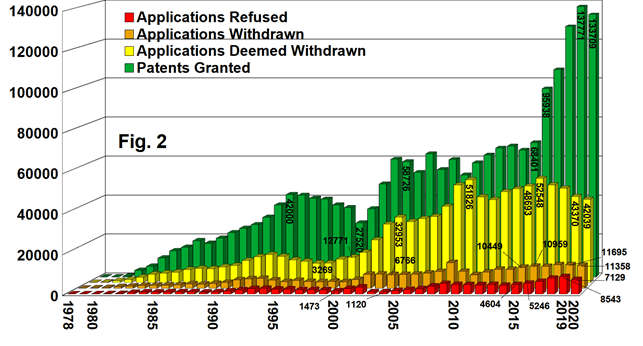 It seems plain that EPO procedures must have changed in order to facilitate a doubling in the number of patents granted since 2015. The EPO did introduce a new performance management system, closer monitoring of timeliness, a focus on clearing very old files, and a reduction in Examiner time spent on projects other than core examination duties. Productivity, i.e. the number of applications processed to a conclusion each year, has increased significantly. An interesting question is, have standards changed? Have patents been granted since 2015 which in earlier times would not have been granted?

In this context it is noted that grant rates above 65% (darker green in Fig. 3), not unknown in the past, occurred only in years before 2000. On the other hand, grant rates less than 55% (lighter green in Fig. 3) occurred only in the seven years from 2008 to 2015, that being a period starting with the global financial crisis which led some applicants to reduce their portfolios of pending patent applications, bringing about record numbers of withdrawals and deemed withdrawals in 2009 and 2010. There is, of course, no “correct” grant rate and variation from year to year is to be expected, but grant rates between 55% and 65% might be seen as mainstream. 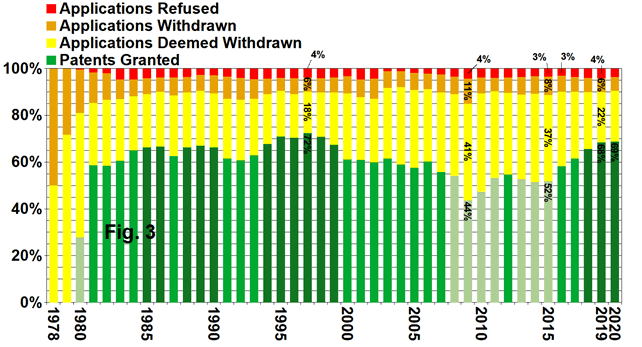 Another parameter that can be considered is the percentage of patents granted in relation to the percentage of applications refused. This ignores applications where processing is completed due to action (withdrawal) or inaction (deemed withdrawal due to failure to meet a deadline) of the applicant. From Fig. 3 above, for 2015 the ratio of refusals to grants is 3/52 = 0.058. For 2019 the ratio of refusals to grants is 4/68 = 0.059. The value of this parameter, based on proceedings brought to a close by an action of the EPO (grant or refusal), has thus barely changed.