Every year, 2.01 billion tonnes of municipal solid waste is produced, with this figure expected to grow to 3.40 billion tonnes by 2050 [1]. Whilst it is difficult to know how much of our waste is saved from ending up in landfills or incinerators, an extremely conservative estimate is that at least 33% is not managed in an environmentally safe manner [1]. However, with an impressive 88% of UK households considering the practice of recycling an established norm [2], we can clearly see our motivation as a society to address and overcome our throw-away culture. Innovating the way we produce and discard the goods we consume is inextricably linked to this global aim, and thankfully we can already see that the race to develop more sustainable waste management practices is well underway.

In recent years, plastic pollution has become a widely recognised and reported global environmental crisis; we depend on plastic for virtually all aspects of our daily lives, yet recycling this staple material is fraught with difficulties and is often unfeasible. Indeed, even in 2015, it was estimated that only 9% of all plastics ever made had been recycled [3]. Clearly, if we are to turn the tide on our plastic waste production, it is vital that we improve the way we manufacture and manage this widely used material.

In this respect, we can see that good progress is being made. A 2021 EPO study [4] into global innovation trends in recycling highlights the recent exponential growth of patent applications relating to “alternative plastics”. This area is of increasing interest, as alternative plastics can be easier to recycle and even be self-repairing. As seen from the figure below, the rapid growth in the number of applications for alternative plastics corresponds to increased research into vitrimers and dynamic covalent bonding. 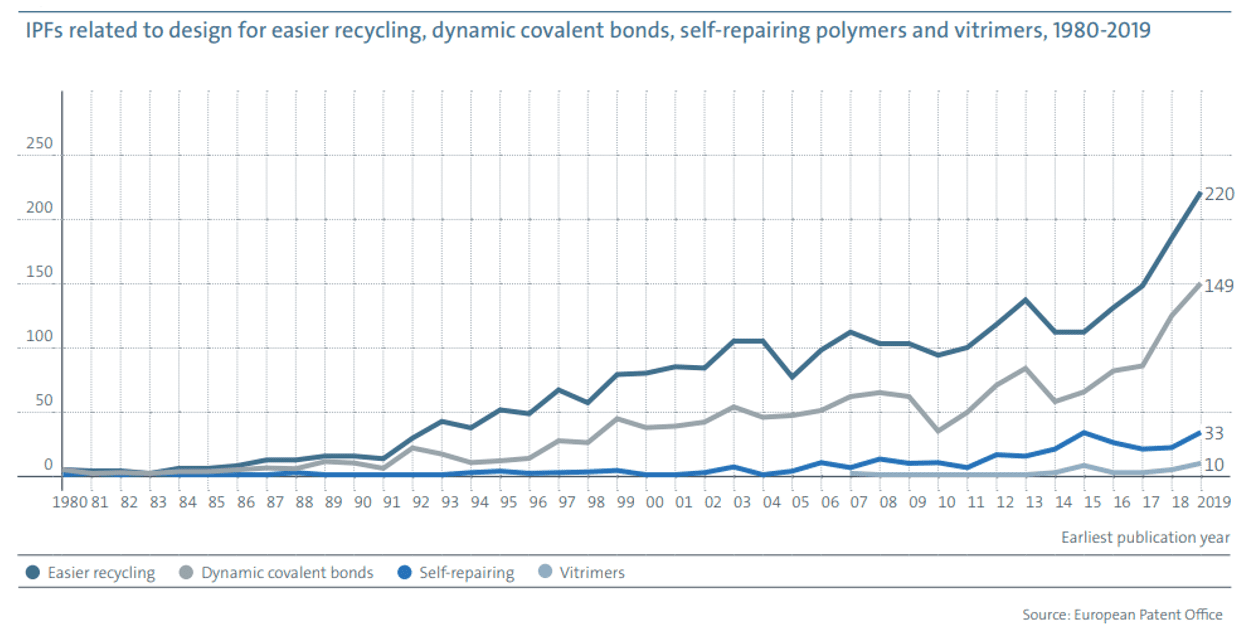 Another growing source of landfill waste is the fast fashion industry. Economic and cultural shifts have meant that the number of garments purchased per capita between 2000 and 2014 increased by about 60% [5], and by 2030, we are expected to discard more than 134 million tonnes of textiles a year [6]. However, currently, just 12% of the material used for clothing ends up being recycled [7]. As with plastics, modern garments are difficult to recycle due to their mixed compositions comprising natural yarns, man-made filaments, plastics, and metals.

Nevertheless, improvements in the way we recycle our discarded textiles have been made. For example, new yarn can now be manufactured from recycled mixed clothing fibres (WO2020014308A1), and soluble textiles comprising polyester-type fibres are being produced which are capable of being dissolved, recovered, and re-spun into new fibres for new clothing (CN106065085A).

It is also easy to forget that even industries pioneering the use of renewable resources, such as clean energy production, must also work towards sustainable waste management. Solar panels, wind turbines, and hydroelectric pumps all require physical components with finite life spans. After a certain amount of sustained use, these components will become too inefficient or unreliable to operate effectively. For example, whilst most well-built solar panels can be expected to function adequately for at least 30 years, photovoltaic degradation of the solar cells is still to be expected [8]. It was estimated that by 2016, we had produced around 250,000 tonnes of solar panel waste [9]. Furthermore, photovoltaic cells contain certain amounts of toxic substances [10], meaning that their end-of-life disposal must be carefully managed to minimise their impact on the environment.

Therefore, in order to reduce the waste associated with the lifecycle of a solar panel, methods of dismantling and recycling their complex components are being researched. Many patent applications for inventions aiming to tackle these problems have been published over the years. For example, US6063995A, published in 2000, proposed a solution for recycling crystalline silicon photovoltaic modules to recover their solar cells, lead, and other components. This solution utilises thermal decomposition of polymeric layers of the modules to separate solar cells from their glass substrates, with hazardous materials being safely collected during the process. KR102258669B1, a more recent patent granted in 2021, also tackles this problem and discloses a method of heating a wire to temperatures between 400 and 1000 ℃, such that it can be drawn along an interface between a glass panel and EVA layer to separate the two.

It is clear that we have a long way to go before we cross the finish line in our race to becoming truly sustainable. However, year-on-year, we are seeing more money, time, and work invested into the creation of sustainable products and practices, with a vast number of patent applications being filed every year embodying this progress. Whilst we should not ignore the stark reality we currently face with regard to the mountains of waste we are responsible for, neither should we diminish the achievements of innovators and their inventions which are leading the way to a cleaner future.