Over the summer we conducted a survey of European patent holders and applicants in a variety of different sectors to gauge their attitudes towards the forthcoming Unitary Patent (UP) and Unified Patent Court (UPC) package. In this article we present some of our findings.

1. Demand for Unitary Patents may initially be limited

“When the Unitary Patent is available, what proportion of your organisation’s European patents and European Patent applications do you expect to validate as Unitary Patents?”

The answers to this question suggest that demand for Unitary Patents may be limited, at least initially.

A majority of respondents expect to validate 20% or less of their European patents as Unitary Patents once the UP is available.

There is some variation in the intention to use the Unitary Patent between industries. For example, two-thirds of respondents in the Aerospace and Defence sector said that they would not use the Unitary Patent at all, and the other one-third said they expected to validate less than 10% of their European patents as UPs. In contrast, in the Chemistry and Life Sciences sector, 42% of our respondents said they would validate more than 20% of their European patents as UPs.

These differences may reflect differences in the perception of the value of the Unitary Patent.

In the Chemistry and Life Sciences sector it is common for patentees to validate each of their European patents in several of the available EPC contracting states, so the Unitary Patent may represent a significant cost saving over traditional national validations. However, patent portfolios in this industry may include highly valuable “crown jewels” that need to be protected from the risk of central revocation and are therefore unsuitable for validation as UPs. The results of our survey may therefore reflect a desire in the Chemistry and Life Sciences sector to balance the cost savings available from using the Unitary Patent with the need to protect key assets from the risk of central revocation.

In contrast, in the Aerospace and Defence sector, patenting activity may be focused on a much smaller number of territories, such that the cost benefits of using the UP are more marginal, particularly as key states such as the UK will not be covered by a UP.

“When the Unitary Patent is available, what proportion of your organisation’s European patents and European Patent applications do you expect to validate as “classical” national patents in EPC member states?” 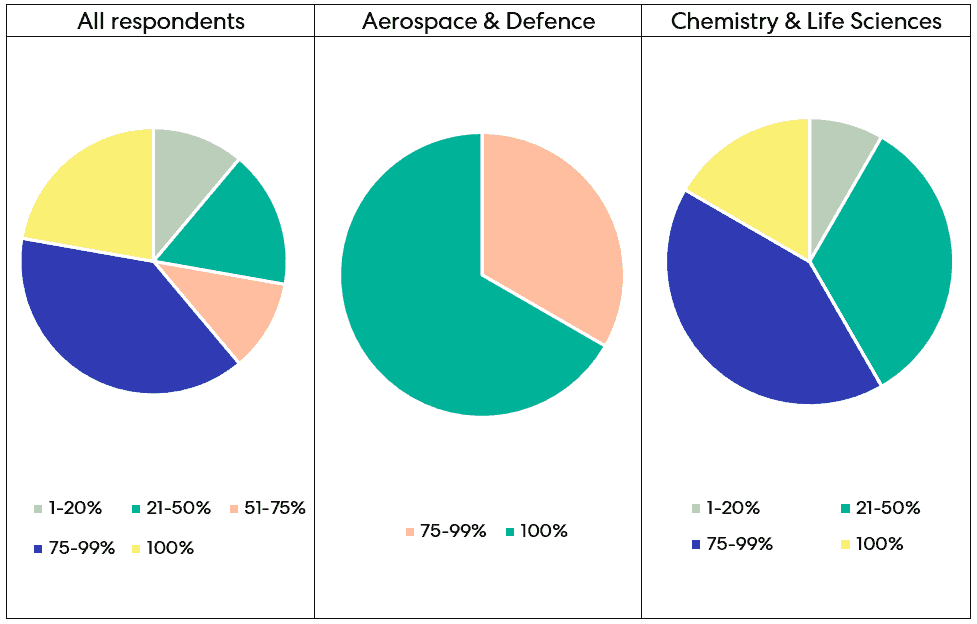 The answers to this question appear to confirm that initial demand for the UP may be limited.

Almost 73% of respondents expect to continue to validate more than half of their European patents as classical national patents once the UP is available.

Again, intentions vary by industry, with two-thirds of respondents in the Aerospace and Defence sector expecting to validate all their European patents in the classical manner as national patents, and the other third expecting to validate 75- 99% of their European patents in this way. In contrast, in the Chemistry & Life Sciences sector, 58% of respondents expect to continue with national validations for 75% or more of their portfolio.

2. Patent proprietors may take a nuanced approach to opting out of the jurisdiction of the UPC

“What proportion of your organisation’s existing portfolio of European patents and European Patent applications do you expect to opt out of the jurisdiction of the UPC?” 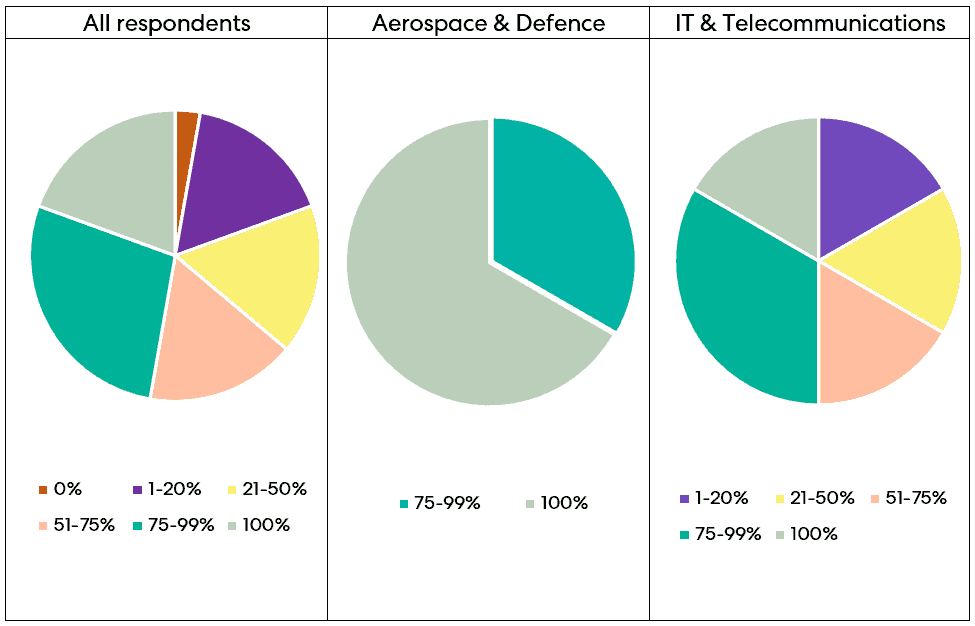 Just under 3% of respondents indicated that they would not opt any of their patents out, whereas almost 64% indicated that they expected to opt out more than half of their portfolios. This reflects a degree of discomfort over the risk of central revocation, but perhaps also a recognition that the UPC will need to some cases to cut its teeth on.

The Aerospace & Defence industry seems to be most wary of the UPC; none of our respondents expected to opt out less than 75% of their portfolios, and the majority expected to opt out all their patents. This may be indicative of a perception that each individual patent in a portfolio in the Aerospace and Defence industry is valuable in its own right and thus should be protected from central revocation.

These responses suggest that patent proprietors will be taking a nuanced approach to opting out, rather than opting out or leaving in their entire portfolios.

3. Applicants will not immediately switch to a national filing strategy

“Do you expect your organisation to file more, fewer or about the same number of national patent applications when the Unitary Patent and Unified Patent Court system comes into effect?” 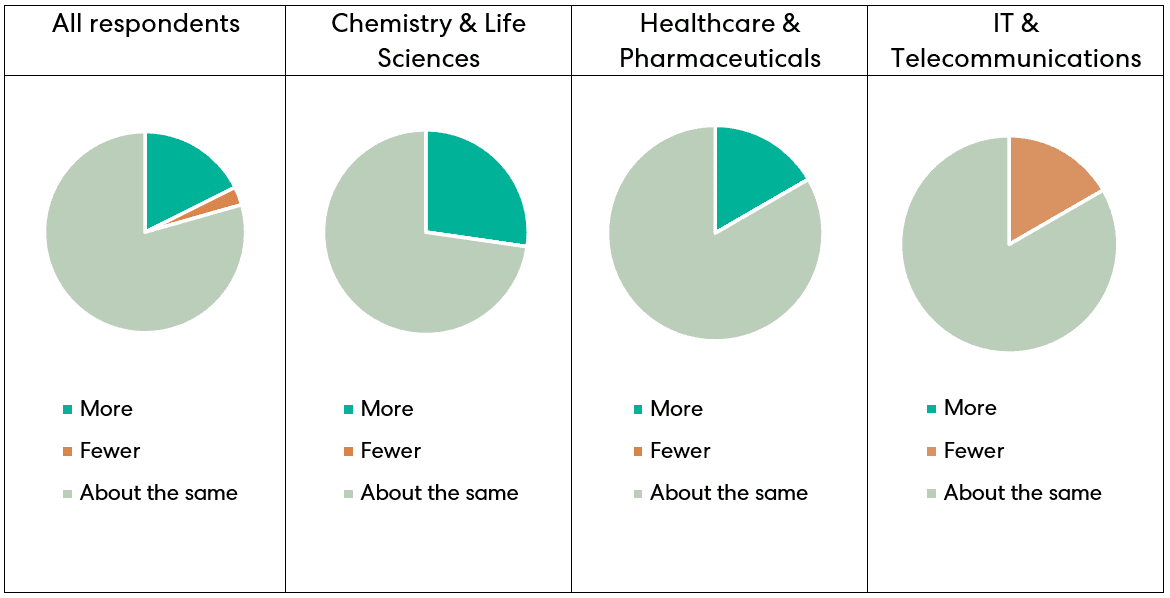 It appears that at this stage most organisations are not considering changing their filing strategy significantly as a result of the introduction of the UPC and UP. The vast majority of respondents (79%) indicated that they expected to file about the same number of national patents when the UP/UPC system comes into effect.

4. Experienced litigants will welcome the UPC 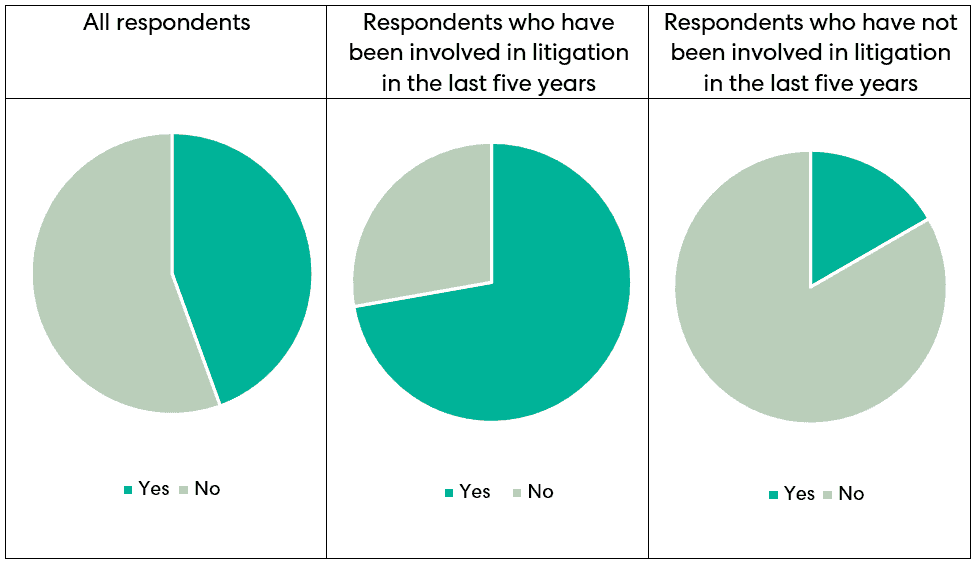 55% of respondents answered “yes”, the other 45% answering “no”. Thus, only a minority of the organisations we surveyed expect to have to defend themselves at the UPC.

However, those organisations that had been involved in litigation (as defendant or claimant) in the last five years have a higher expectation of having to defend a claim at the UPC – 72% of these experienced litigants answered yes. In contrast, only 16% of respondents who had not been involved in litigation in the last 5 years thought that they would be on the receiving end of a claim in the UPC. 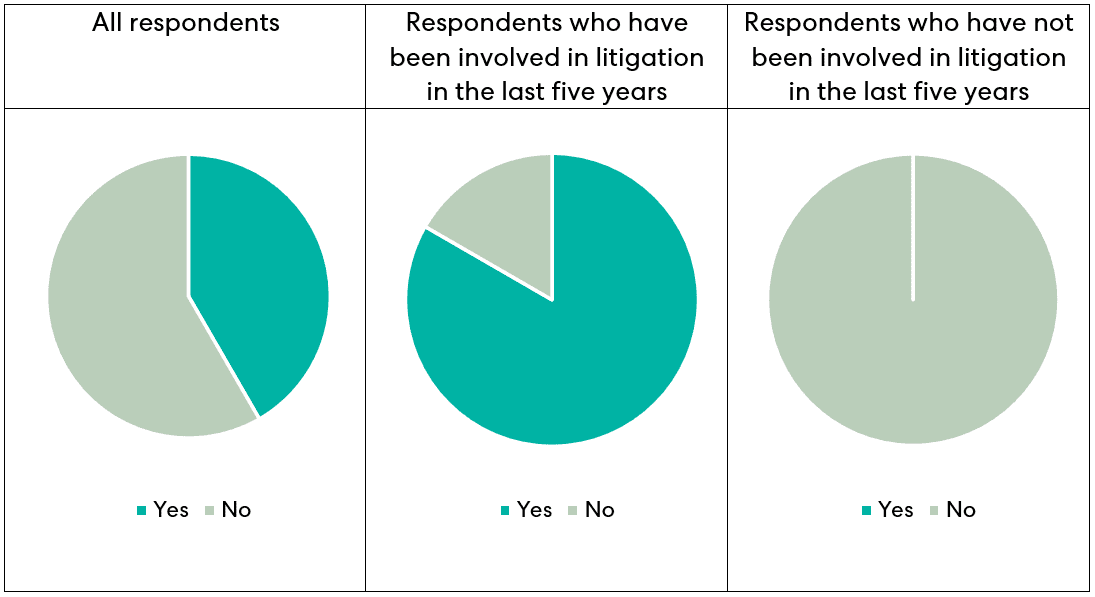 5. Opting out is the top priority for patent proprietors, but organisations still feel that they need more education

We asked our respondents what their top priorities were for preparing for the UPC and UPC system. Opting out featured in 59% of the responses to this question. The next highest priority, featuring in 27% of responses, was to improve understanding of the system, while a small but significant number of respondents still needed to decide whether or not to use the UP/UPC system – this featured in 13% of responses.

6. Patent proprietors are understandably concerned about an untested Court

7. But a simplified system is attractive

When we asked what the biggest advantage of the UP/UPC system was, the simplicity of a single action leading to a single decision was mentioned in 64% of responses. Cost savings, speed and the possibility of central revocation of competitor patents were also cited as benefits.

As is to be expected for any new system, a degree of concern about the UP/UPC system is evident among patent proprietors and applicants. Although most of our respondents could see some benefits of the new system, many appear to be adopting a wait-and-see approach. The experience of early adopters will therefore be key in building confidence in the new system.