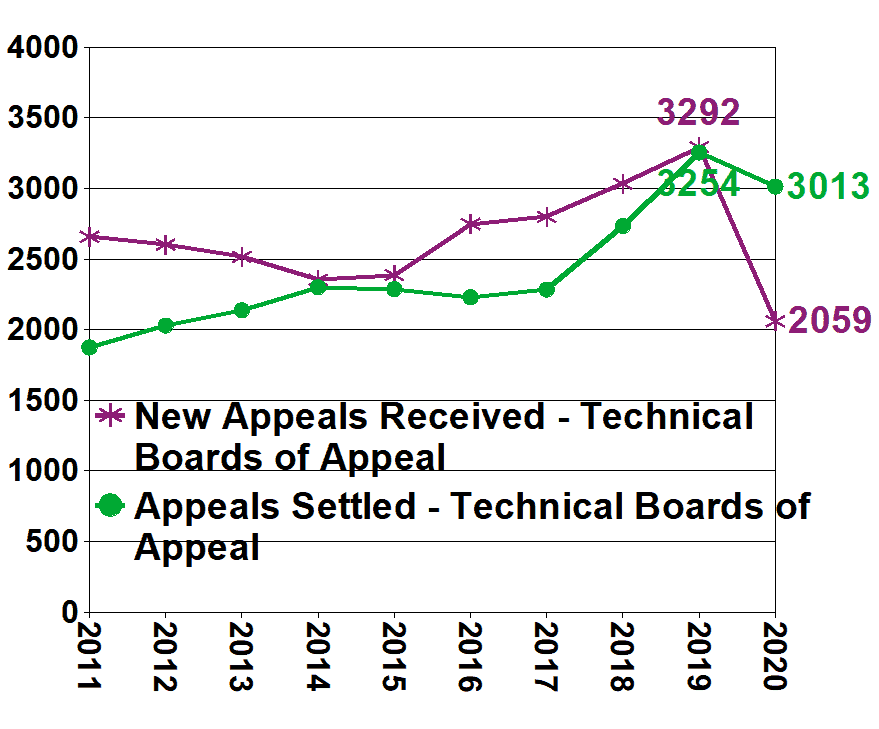 Clearly, 2020 was a year in which the COVID-19 pandemic presented the Boards of Appeal and the wider EPO with significant challenges.

According to the Annual Report of the Boards of Appeal, in 2020 the Technical Boards of Appeal received 37% (1233) fewer new appeals than in 2019. Rather than applicants, patentees and opponents having less appetite for appeals in 2020 this was evidently the result of EPO first instances generating fewer appealable decisions.

In contrast, in 2020, only 7% (241) fewer appeals to the Technical Boards of Appeal were settled than in 2019. At first sight it might seem from this that the ability of the Technical Boards of Appeal to settle appeals was relatively unaffected in 2020. However, in 2020 only 920 oral proceedings took place compared to 1560 in 2019, which indicates that the capacity of the Boards was significantly affected. 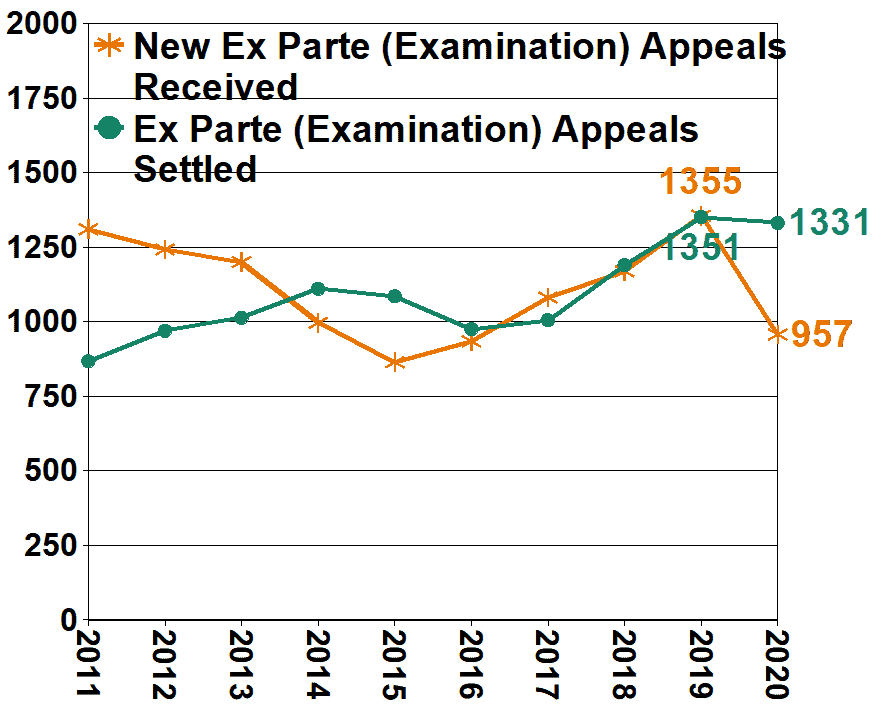 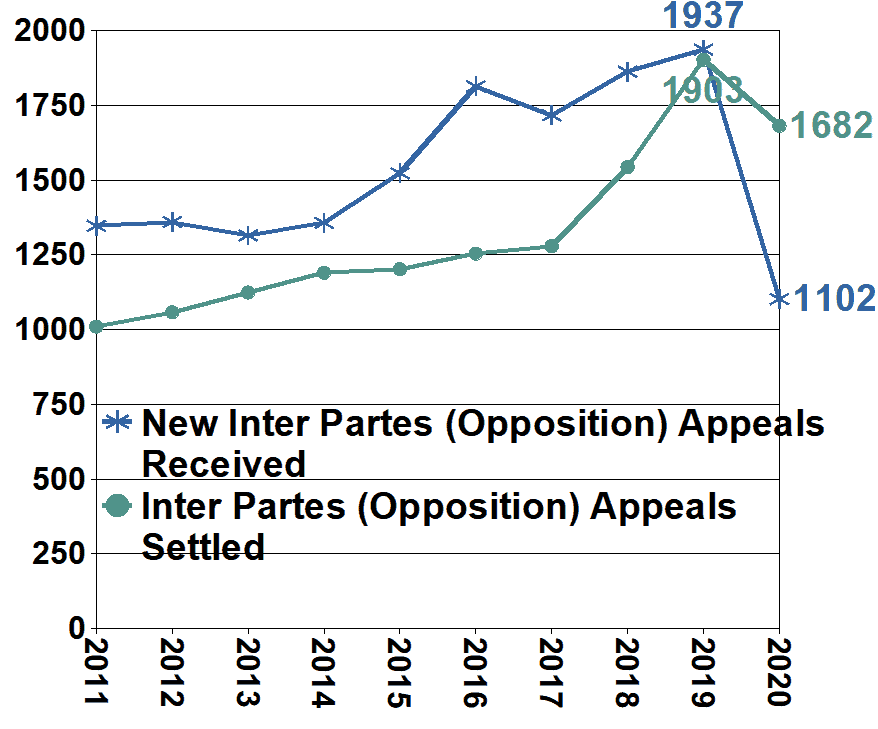 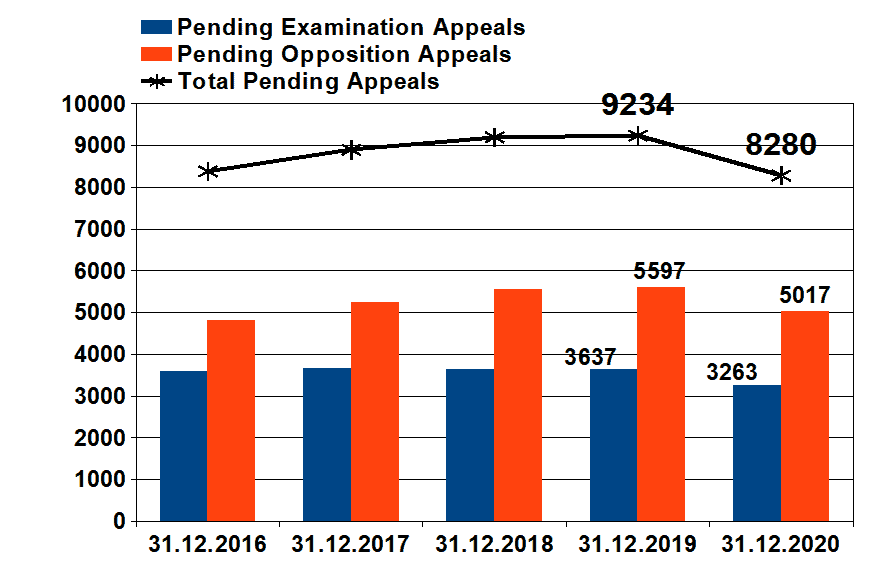 The fall in new appeals, with the lesser fall in appeals settled, resulted in a 10% reduction in appeals pending at the end of 2020, both for ex parte (examination) appeals and inter partes (opposition) appeals. 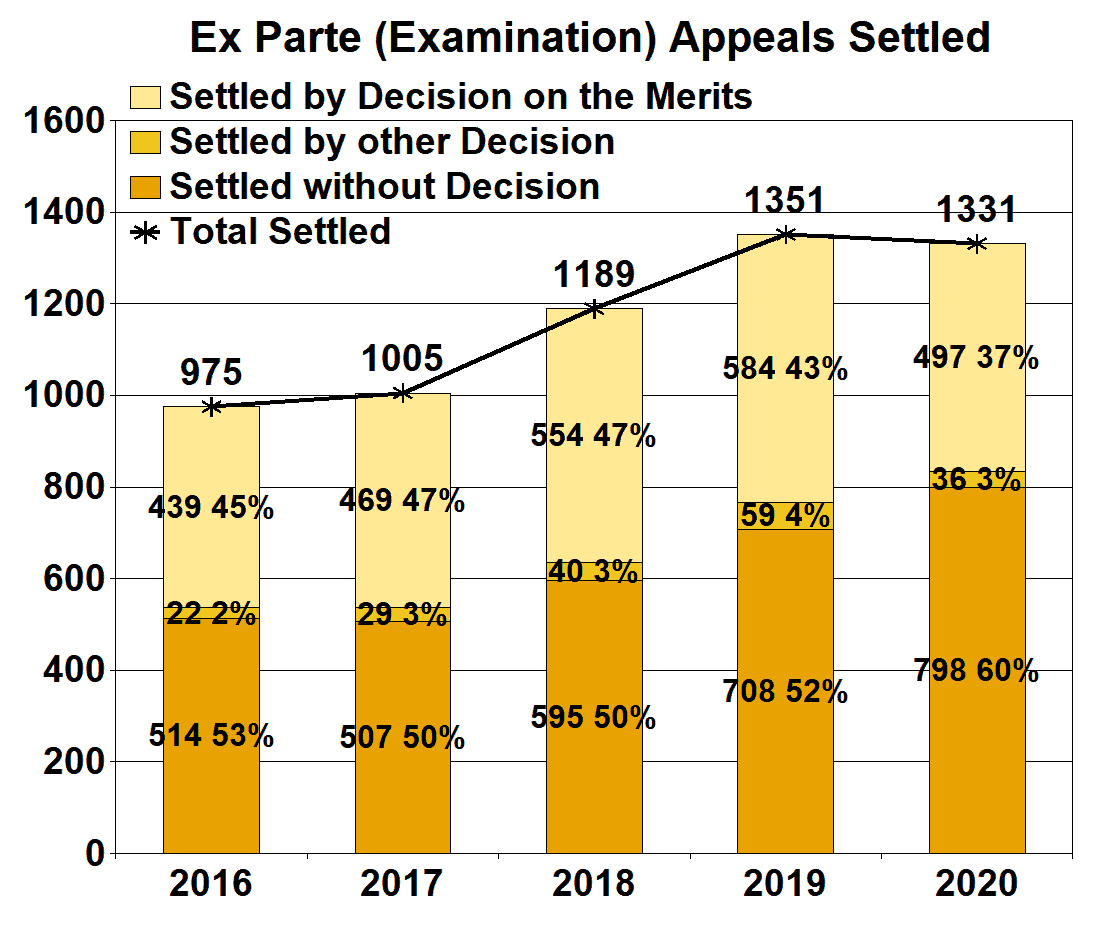 A small fraction (ca. 3%) of ex parte (examination) appeals have been settled by decisions of the Technical Boards of Appeal based not on the merits of the appeals but on more or less formal matters (e.g. identification as appellant of a party not entitled to appeal; payment of a reduced fee for appeal when not entitled to reduction, etc.). 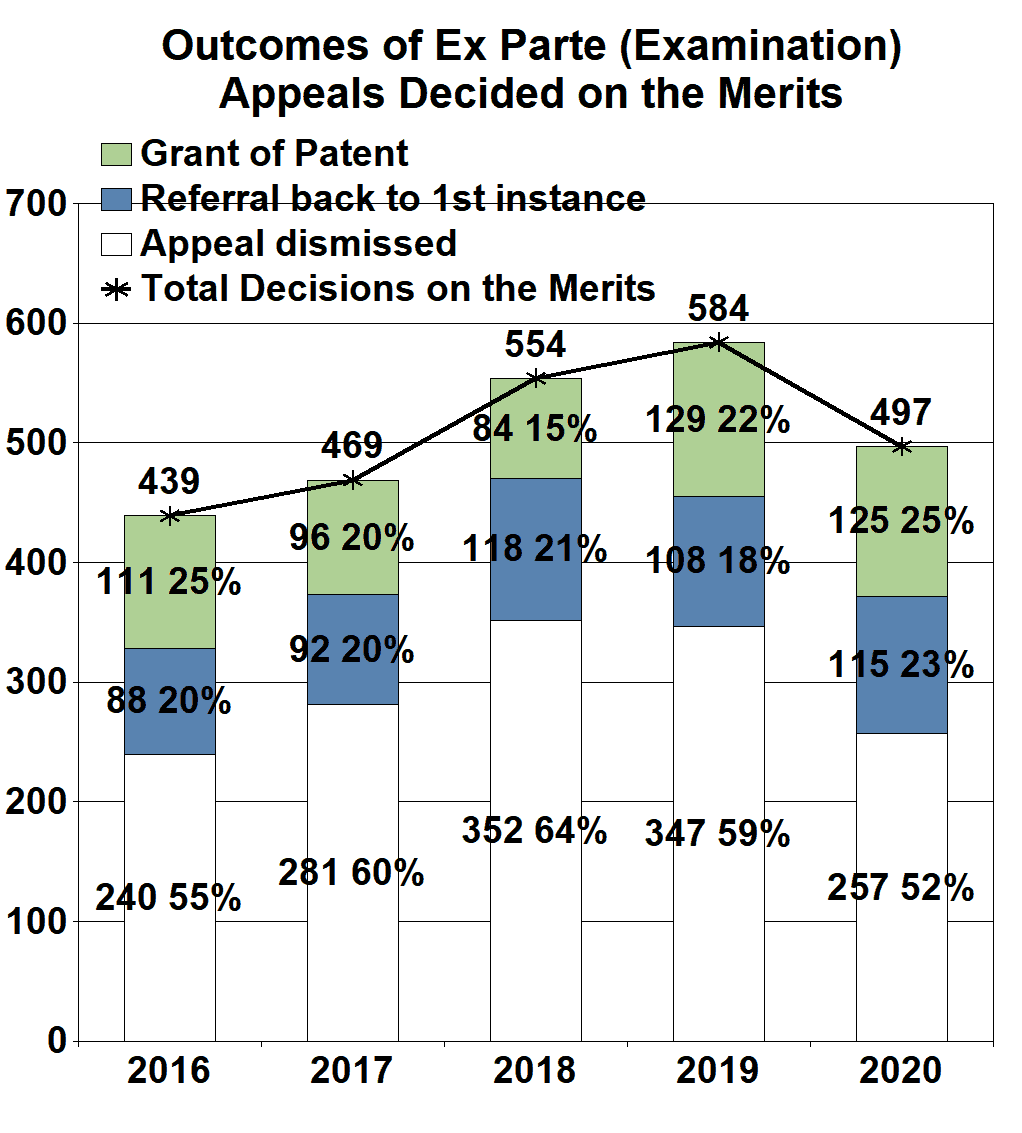 Ex parte (examination) appeals settled by decisions based on the merits have most often had the outcome “appeal dismissed”: the appeal fails and the first instance decision stands unrevised.  However, there was a considerable fall in the number and proportion of appeals dismissed in 2020, perhaps related to the increase in appeals withdrawn after substantive communications from the Boards. Around one fifth of decisions on the merits have been for referral back to the first instance: objections which brought about the appeals are overcome but other issues remain to be addressed and require “two-instance” consideration. Up to a quarter of decisions have been to grant patents –  in one form or another, which may not be the form initially sought in the first instance proceedings.

Inter partes (opposition) appeals handled by the Technical Boards of Appeal arise from decisions of first instance Opposition Divisions and for the most part concern first instance findings based on substantive examination of the merits of the oppositions concerned. On occasion, appeals may relate to other matters arising in first instance opposition proceedings (e.g. identity of opponents, transfer of oppositions) but such matters appear to be relatively rare. 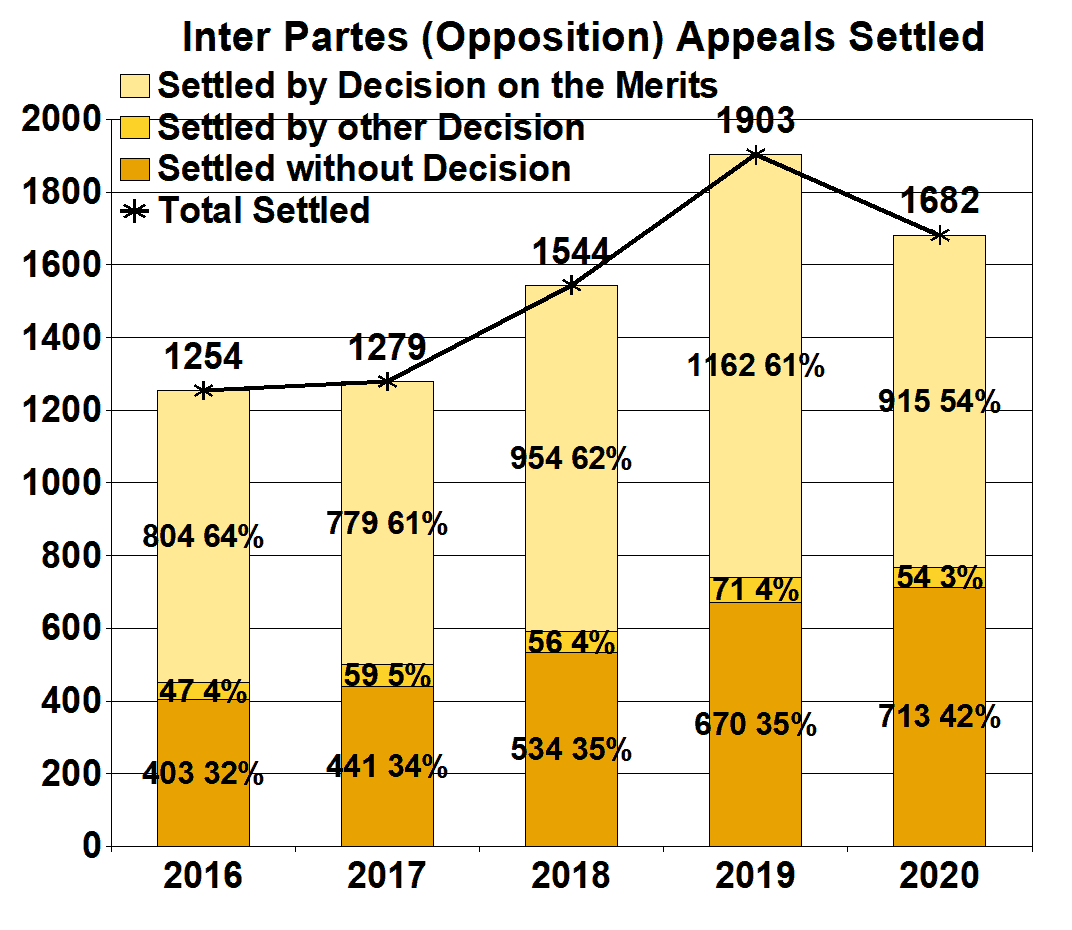 Of inter partes (opposition) appeals settled without decisions the proportion of appeals withdrawn after substantive communications from the Boards of Appeal has been increasing, and increased particularly strongly in 2020. As noted above, it appears that in 2020 there was an increase in the number of substantive communications issued by Boards of Appeal, which might be expected to have resulted in increased withdrawals. 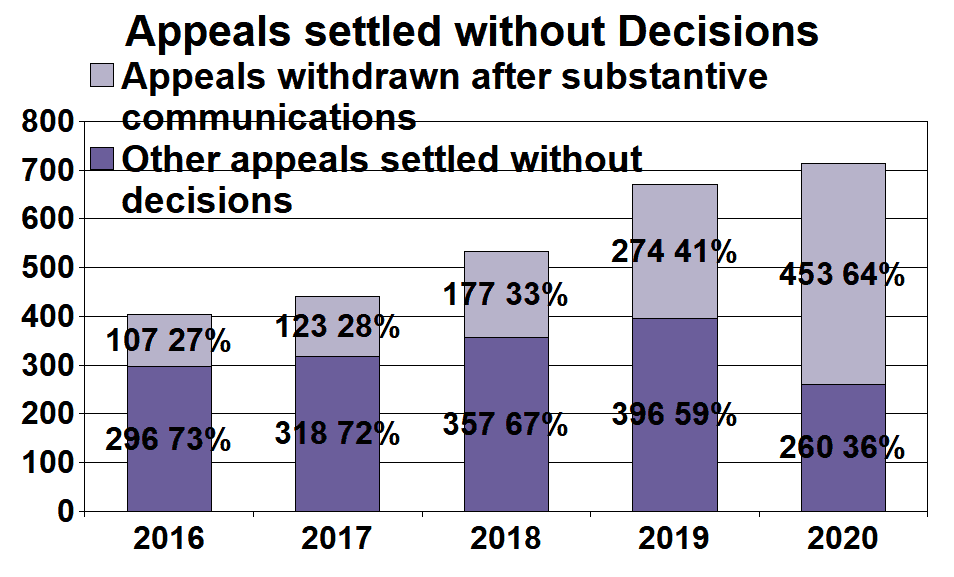 A small fraction (ca. 4%) of inter partes (opposition) appeals have been settled by decisions based not on the merits of the appeals but on more or less formal matters (e.g. identity of opponent-appellants).

A majority of inter partes (opposition) appeals have been settled by decisions on the merits, though the number of those decisions fell in 2020. 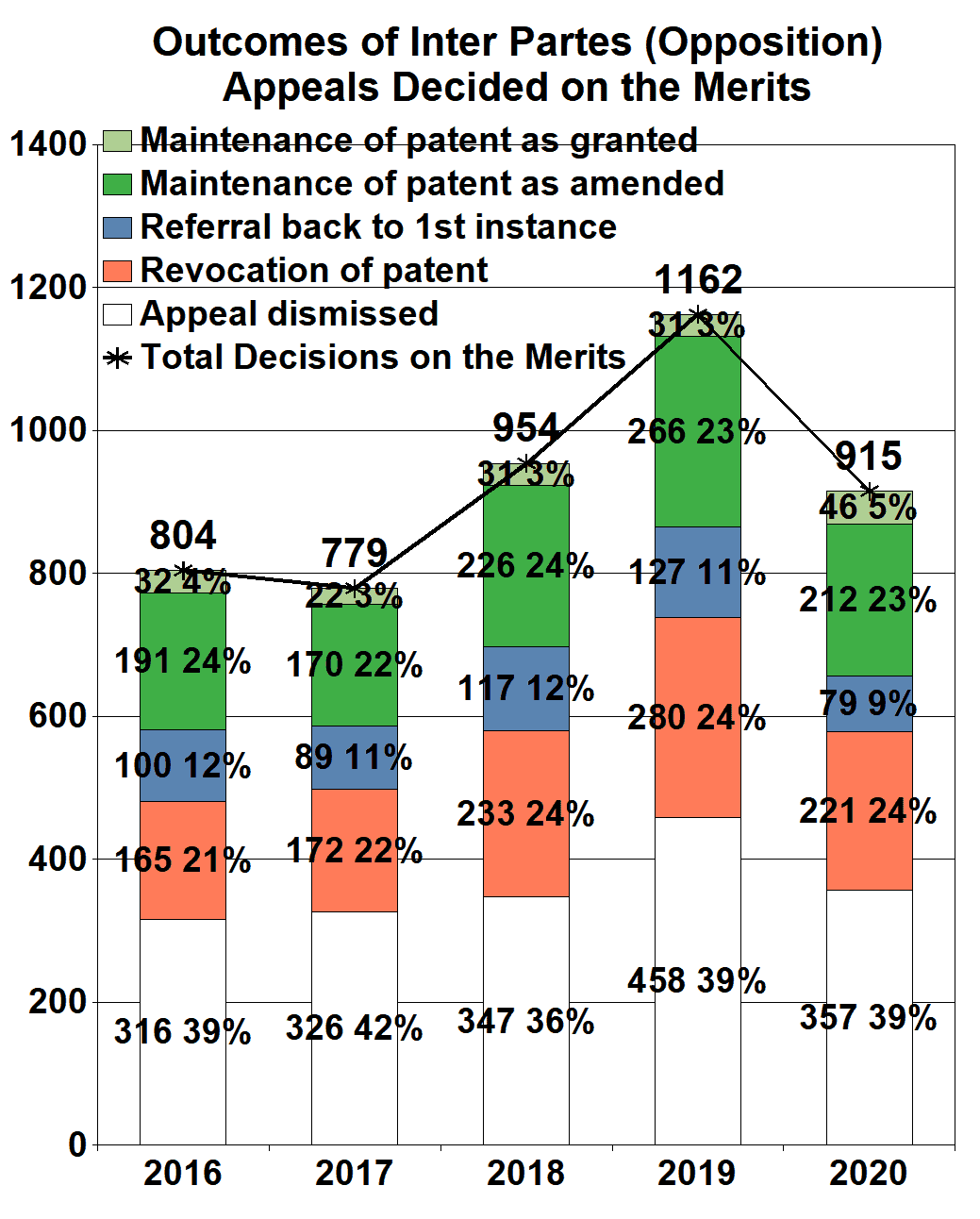 The single most likely outcome has been dismissal of the appeals: first instance decisions stand unrevised. However, in appeals settled on the merits first instance outcomes have most often been revised in some way, with the revised outcomes ranging from revocation of patents to maintenance of patents as granted, but also including less extreme revisions such as maintenance of patents in some newly amended form and outcomes in which the cases are referred back to the first instance (objections which brought about the appeals are overcome but other issues remain to be addressed and require “two-instance” consideration). Any revision could be seen as at least partial success of the appeals for the appellants, or one of the appellant parties in cases in which patentees and opponents both appeal.

Rule 103 EPC was amended on 1 April 2020 to provide more scope for refunds of some of the appeal fee, apparently encouraging appellants to consider at each stage whether they have a continuing interest in pursuing their appeals.

Rule 103 EPC now provides for Boards of Appeal to issue communications indicating their intention to commence substantive examination of appeals. If an appeal is then withdrawn within two months of notification of such a communication the appellant receives a 75% refund of the appeal fee. 560 such communications were issued in 2020 and 30 refunds of 75% obtained.

It may be worth noting that, with many oral proceedings postponed, the Boards were able to redirect resources and issue a significantly greater number of substantive communications in 2020.