I’ve been in the patent profession for over 20 years, and sometimes it’s nice to be reminded why the whole system exists in the first place. Happily for me, I recently had such a reminder in the somewhat unlikely form of the official trailer for Avatar 2, or more properly ‘Avatar: The Way of Water’.

The trailer looks spectacular, and there is a snip at 1 minute 22 seconds which has drawn a lot of attention. A Na’vi character (i.e. a giant blue alien), manipulates combinations of leather and woven fabrics which are partially submerged. These fabrics, along with the hands of the character, look incredibly realistic. There has been debate as to whether these can possibly be digital effects, given the realism achieved, but blue skinned actors are hard to find, and that doesn’t look like body paint.

So how is it done?

Here is where the magic of the patent system comes in. The patent system is designed so that, in exchange for fully disclosing an idea so it is available for the future of humankind, a short-term monopoly is provided. Thus the curious can learn what might otherwise be kept as a trade secret.

Returning to Avatar, the renowned New Zealand agency, Weta Digital, worked on the digital effects and in the first half of 2020 Weta filed a bunch of patent applications relating to modelling virtual fluids. Excitingly, these are now published for the world to see.

Watching the trailer, you can see the character’s hand slap down into the water before seconds later a fantastical creature burst through the surface, dripping wet. Now take a look at Weta’s patent for generating thin film interfaces. Figures 3A and B in particular are not a bad visual match for the trailer and if you want to know what’s going on, it is all set out for you. At its heart, the application describes that the fluid is conceptually divided into a bulk fluid and an ‘emitted fluid’. The bulk fluid can be simulated relatively economically in terms of the processing resources, but if an image portion representing a fluid is within a threshold amount of an interface between an object and the fluid, the so-called emitted fluid is simulated, and more complex processes apply: for example, surface tension, capillary wave patterns, oscillating droplets and thin film dynamics may all be considered.

Despite the visual accomplishment of the imagery, a key component of patentability can be making efficient use of computing resources, which is clearly the case here: the complex processes are only applied where they will be visually impactful.

But how about the wet fabrics? Well you can read about that here. This hints that the secret sauce may be modelling the fabric as particles linked by forces and setting up a simulation that weakly couples the fluid and the fabric, such that each can be modelled separately (and computationally efficiently).

There are many other applications in Weta’s name, each providing an enticing piece of the puzzle leading to the astonishing visual results. This really feels like a case where patents provide a peek behind the curtain which feels almost illicit, laying bare the secrets of the world’s foremost digital artists in a space we can all reach. You could almost say they’re like seeds of a sacred tree (that’s an Avatar thing, by the way). 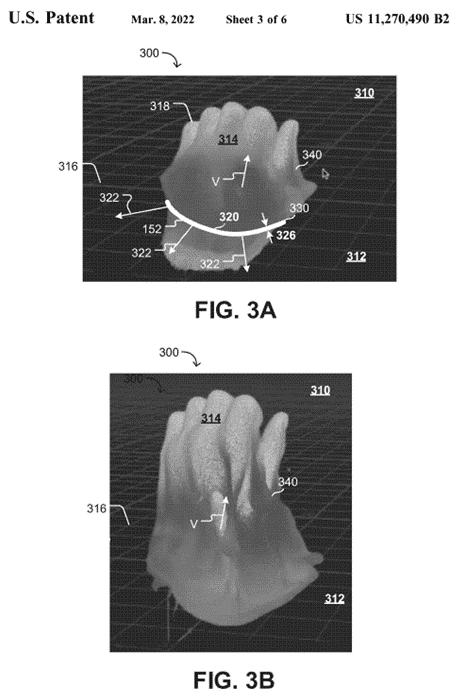