With a renewed scientific interest in the medicinal properties of cannabis in recent years, there has been a sharp rise in the number of patent applications filed at the European Patent Office which are directed to inventions in this field. We look at the background to these increased patent filings, and the opportunities that exist for creating strong patent portfolios in this growing space.

Cannabis sativa has been cultivated across the world for thousands of years, with the fibres of some strains (hemp) finding use in textiles, polymer composites and biofuel, while other strains are of course known for their psychoactive properties. Cannabis as a medicinal herbal product has existed for hundreds of years in traditional Indian and Chinese medicines, and was even briefly used for medicinal use in the UK in the 19th century for treating rheumatic pain and convulsions, for example. However, with difficulties in controlling dosages, and the rise in injectable painkillers, its use declined.

Cannabis was first criminalised in the UK in 1928, and its recreational use remains so according to the Misuse of Drugs Act 1971. However, there has been a new focus on its medicinal properties in recent years, particularly so since the World Health Organisation suggested in 2018 that certain cannabis-derived products should be considered as medicines. Medical use of cannabis in the UK has been legal since November 2018, though its use is strictly controlled and it can only be prescribed by specialist consultants. Currently, the only approved cannabis-derived medicine is Sativex® for treating spasticity caused by multiple sclerosis.

Over 500 chemical compounds have been identified as being unique to cannabis, including many cannabinoids, terpenes and alkaloids. It is well known that the psychoactive properties of cannabis are due to Δ-9-tetrahydrocannabinol (“THC”), and there is a mounting body of evidence that the medicinal properties are due to the structurally similar cannabidiol (“CBD”). CBD oil containing less than 0.2% THC is legal for sale and use in the UK without prescription, and the CBD product Epidyolex® from GW Pharma received a marketing authorisation from the European Medicines Agency in September 2019 for treating Lennox-Gastaut syndrome or Dravet syndrome, rare types of epilepsy.

The European Patent Convention prohibits patents being granted for inventions that are morally questionable, but not merely because the exploitation of such inventions would be prohibited by law.  This position, combined with the relaxation of laws relating to the medicinal use of cannabis, has led to a 24-fold increase since 2013 in the number of European patent applications mentioning cannabis or cannabidiol in the title, as shown in Figure 1. However, patents have been granted by the EPO since as long ago as 2006, when GW Pharma’s EP 1280515 was granted, directed to use of cannabis in the preparation of an aerosol or spray pharmaceutical formulation. 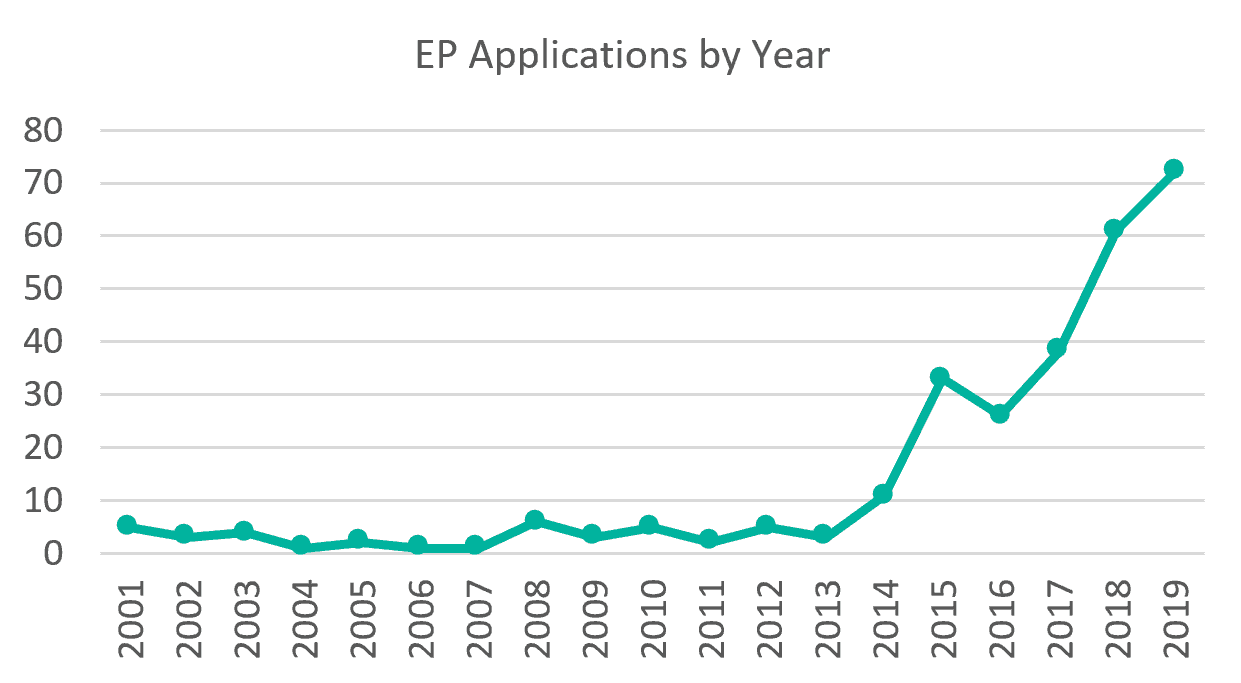 So what are the inventions on which this increase in patent filings are based? As can be seen from the word map in Figure 2 (prepared from the full text of the dataset obtained from the European Patent Register), and as might be expected with the legal and regulatory framework that is in place, these patent filings are directed to all manner of inventions that one might expect from the pharmaceutical sector – the use of known or new chemical entities – in particular cannabinoids – in pharmaceutical compositions for treating specific diseases, as well as delivery systems, dosage forms and extraction processes of the natural products.

This is confirmed by looking at the CPC codes applied to each filing, with the most common being: A61K36/185 (medicinal preparations of undetermined constitution containing material from algae, lichens, fungi or plants, or derivatives thereof, e.g. traditional herbal medicines, specifically Magnoliopsida (dicotyledons)) and A61K/31/352 (medicinal preparations containing organic active ingredient having heterocyclic compounds condensed with carbocyclic rings (e.g. cannabinols)).

Although there is clearly an increased interest in obtaining European patents for cannabis-derived inventions, the numbers of patent applications filed still lag behind the numbers of US patent applications filed. In the same 20 year time frame, as can be seen in Figure 3, there are at least 3 times as many US patent families, perhaps helped by a number of US states completely legalizing even the recreational use of cannabis and cannabis derived products. 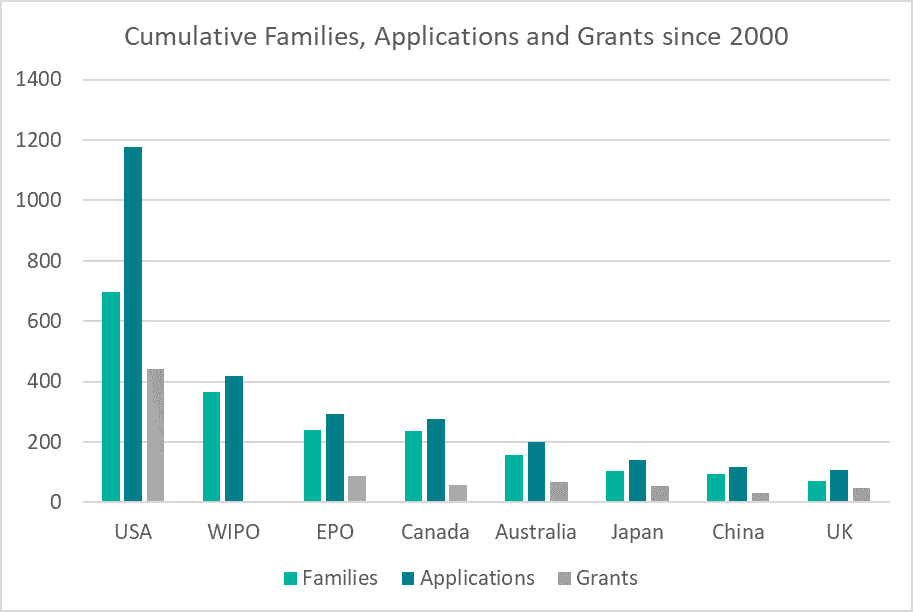 Despite any public policy challenges around the use of a controlled substance for medical benefit, cannabinoids that are found in cannabis are in this sense no different to other natural products that have revolutionised medicine. The opioid morphine comes to mind, which was first extracted from poppies and is administered as a painkiller, despite being a Class A drug under the Misuse of Drugs Act 1971 and a Schedule 2 Controlled Drug under the Misuse of Drugs Regulations 2001 and thus illegal for recreational use.

The medicinal properties of cannabis have been known for centuries, and the legal and regulatory frameworks exist to encourage innovation in this area. As with any pharmaceutical invention, it is essential to develop a robust patent filing program to protect the investment required to bring these products to market. While there is a growing body of prior art related to medicinal cannabis, new and inventive uses of CBD, for example, to treat particular diseases – as a single active or as part of a combination therapy – will still be patentable, as will delivery vehicles, formulations and extraction techniques. With the relatively low number of European patent applications in this area, the opportunities to establish a strong commercial foothold in Europe are there for the taking.