Guy Fawkes Night is an annual event in the United Kingdom which commemorates the failed gunpowder plot to blow up the Houses of Parliament with bonfires, fireworks and foods such as parkin (treacle cake) and toffee apples.

To honour the occasion, we look at some amazing firework inventions.

Fireworks were invented around 1000 years ago, long before the patenting system came into existence. However, the first record of a firework patent was granted in 1899. US 638,416A describes a device for exhibiting pyrotechnic effects, combining a rotary body for securing fireworks thereto, and a motive device for rotating the rotary body in a continuous manner. The result is the appearance of a very effective pin or Catherine wheel, similar to those that we still use today! 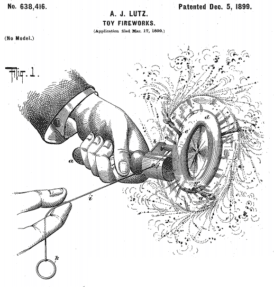 Fast forward over a hundred years later to find an invention patented by Walt Disney. EP0620910 describes “a method and system of presenting precision firework displays”. The invention involves projectiles including a shell made of a bonding agent and an explosive agent that shatters to form light flakes that fall to the ground. The projectiles can be accurately detonated at precise locations in the sky to form distinctive shapes or patterns, including Mickey Mouse! 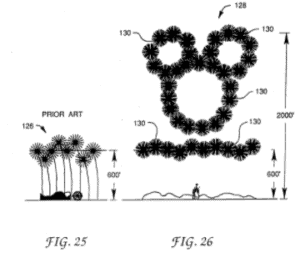 CN200968823 is a utility model that discloses a firework with a smile or smiley face effect. The firework has an outer (1) and inner (2) cylinder, with “banger” gunpowder (3) housed in the inner cylinder. A combustion wire (4, 5) with sleeve pipe (6) leads to a second portion of illumination effect gunpowder (10). A smiley face made of light transmissive material, formed of eyes (7, 8) and a smile (9) are present on the outer wall of the cylinder. During use, the lead is lit, and the two types of gunpowder are activated. This creates a high-altitude explosion and, simultaneously, the illumination of a smiley face. 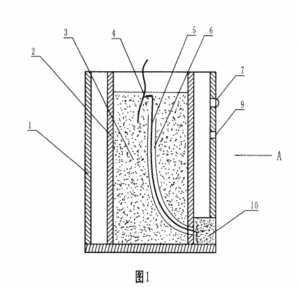 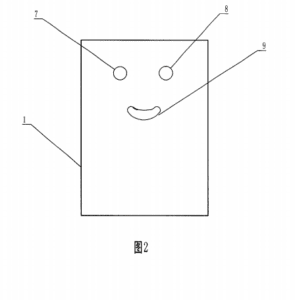 US8142581B1 describes “low smoke” firework compositions, having a high nitrogen content energetic material as the primary component. The reduced smoke is attributed to the lower carbon content in the composition as compared to conventional fireworks. The reduced smoke fireworks are less dependent on weather conditions and are less likely to obscure the view of further fireworks in a firework display.

This patent also provides an insight into how different coloured fireworks are made. In this patent, strontium, barium and copper salts of the energetic material are used to yield red, green, or blue fireworks respectively. 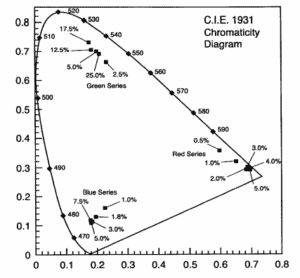