International Civil Aviation Day is celebrated every year to create and reinforce awareness of the impact of international civil aviation on the social and economic development of UN member states.

From moderately humble beginnings, where early human flight was confined to the lives of daydreamers and risk-takers, the International Civil Aviation network now carries over 4 billion passengers annually. Although this number is sure to have decreased in 2020, aviation has become a huge part of people’s lives with the Air Transport sector supporting 65.5 million jobs around the world and contributing over GBP 2 trillion to the global economy.

With such immense and far reaching influence, it is no surprise that technical innovation in the aviation sector has reached tremendous heights. So why not look at some of the patents which have shaped this industry into what it is today.

It will come as little surprise that the first patent on this list is Orville and Wilbur Wright’s “Flying-Machine”, which was granted by the USPTO on 22 May 1906. US 821,393 describes the Wright brothers’ wing warping and rudder structure design, which allowed their flying machine to be guided both vertically and horizontally while “maintaining or restoring the equilibrium or lateral balance of the apparatus”. 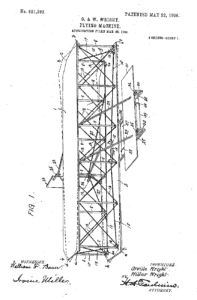 A few years later in 1910, German aircraft engineer Hugo Junkers filed a patent at the German patent office which claimed an inventive airframe which provided means for connecting wings and shell as to offer a “smooth surface to the air”.  Interestingly, Junkers described the design in US 1,114,364 as having a “substantially whale-back shape” which subsequently laid the foundation for the development of many future aircraft and allowed Junkers himself to construct the first practical all-metal aircraft.

Aviation took a giant leap forward to what we recognise it as today when British inventor Frank Whittle developed his internal combustion turbine in 1939. Whittle’s engine, as described in GB 583,022, detailed a gas turbine with blades which drew in air through an orifice and discharged it into the turbine exhaust. This innovative engine concept would eventually surpass the piston and propeller design which dominated the aviation industry at the time. 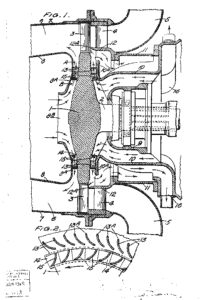 Finally, looking to the future, there has been substantial investment in producing aircraft to reduce the environmental impact attributed to the aviation sector. In this respect, Los Angeles-based company Ampaire are leading the way with their hybrid-electric aircraft, the Ampaire 337. Their patent application, US 2020/0017228, describes a parallel hybrid aircraft comprising an electric propulsion system and a combustion propulsion system for more efficient operation. The aircraft actually took flight on 6 June 2019 and was the largest aircraft of its kind to successfully do so.