With a growing number of extreme weather events happening around the world in 2021, climate change is high on the public agenda. Climate scientists have stated that, for example, the extreme temperatures seen across the US and Canada in June 2021 would be “virtually impossible” without global warming. One way in which climate change can be combatted is the development and implementation of novel technologies for generating the ever-increasing amount of energy needed by the world’s population in a more climate-friendly way.

The Holy Grail of green energy is widely regarded as nuclear fusion because it has the potential to generate huge amounts of energy with little to no environmental impact. It was reported this August that the Nuclear Ignition Facility in the US is on the verge of ‘ignition’. This is a key milestone on the road to generating useable energy by nuclear fusion, where the energy released by fusion of the fuel exceeds the energy supplied to ‘kick-start’ the fusion process. If ignition can be achieved, it is thought that the fusion reaction can be made self-sustaining, which in turn paves the way to the generation of essentially limitless, clean energy from commonly-available fuels like hydrogen.

While this is promising, the practicalities of commercialising nuclear fusion – which currently requires extremely expensive and complex apparatus and temperatures exceeding those in the centre of the Sun – mean that large-scale fusion-based generation won’t be achieved for some time yet. The current lack of practicable fusion-based generators is reflected in the relatively small number of patent applications in this field. According to the EPO’s Espacenet database, only around 287 patent applications for fusion reactor technology were published in 2020. In contrast, over 2,400 applications for fission reactor technology were published in 2020, and nearly 10,000 for wind energy technologies.

So, if fusion reactors are not going to meet the remaining electricity demands any time soon, where might this electricity come from?

The good news on this front is that there are plenty of other green energy technologies1  which are already technically and commercially viable, and which are growing in consumer uptake and technical sophistication. Furthermore, the use of these more mature green energy sources is continually increasing year on year. According to the UK Government’s figures, renewable energy accounted for over 40% of electricity generation in the UK in Q1 2021 and has been responsible for generating more electricity than fossil fuels in the UK in four of the last five quarters. 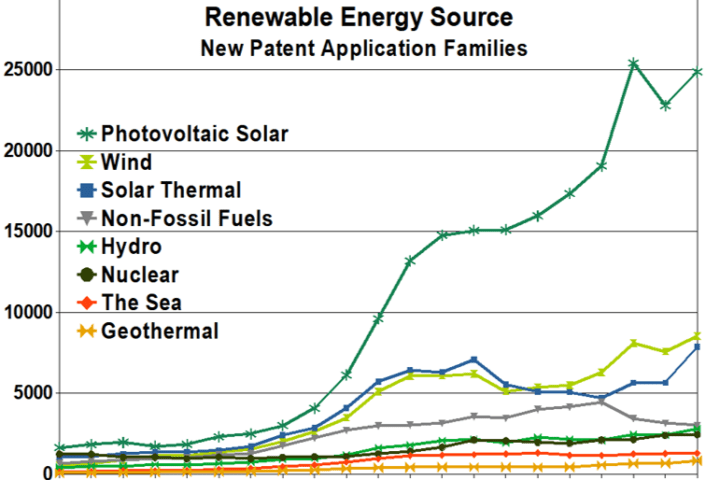 As shown in the accompanying graphs, patenting activity2 has been steadily growing across all green energy sources, so we can expect the proportion of energy derived from green sources to grow even further as the relevant technology progresses and becomes even more established. Across the different sources of green energy, the level of patenting activity varies considerably, but statistics show that almost all green energy sources have seen rising numbers of patent applications year-on-year and at levels above the average (N.B. growth in the number of patent applications across all areas of technology from 2000-2020 was around 500%). 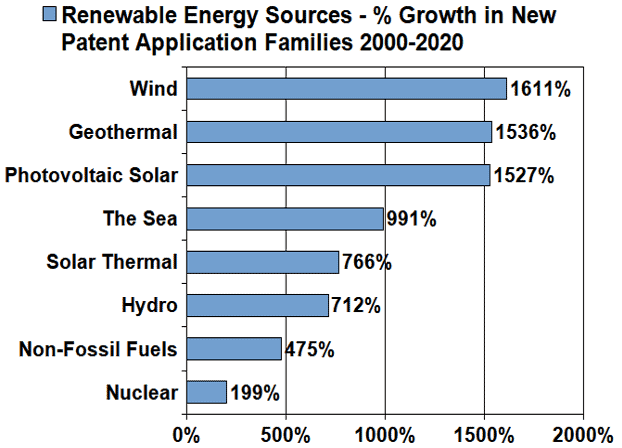 While the number of new patent applications cannot be regarded as an exact indicator of levels of research and development, an increase in patent applications for a particular technology undoubtedly indicates that companies are investing more of their precious budgets into developing and protecting new technical improvements and, more broadly, that there is rapid growth in the field. Rising numbers of patent applications in a particular technical area also gives a good indication that companies see patent rights being a useful strategic business tool for maximising the potential of their inventions and gaining the best foothold on the competitive landscape.

Looking at the patenting activity more closely, photovoltaic solar technology has consistently featured the largest numbers of new families of patent applications in the last couple of decades. In 2020, the number of new families that appeared for photovoltaic solar technology was roughly three times the number of new families appearing in the next most active fields – wind and solar thermal (e.g. solar towers) technologies. This perhaps reflects the fact that photovoltaic solar remains one of the most accessible green energy technologies for direct-to-consumer markets. You will no doubt have noticed the growing number of houses which have panels fitted on their roofs. Geothermal and wind energy, the other areas having the most growth in patenting activity, are also increasingly being applied on both the commercial and consumer scale. The uptake of these technologies can be expected to follow a similar trajectory as climate change becomes an increasing focus for governments and the population in general.

This recent explosion in new patent applications indicates that new, innovative energy solutions are in the pipeline and is promising in terms of reducing damaging emissions, but it could also be problematic for smaller companies or new entrants for whom minimising environmental impact is rapidly becoming an inescapable business imperative. More than ever, the public and governments expect businesses to commit to combatting climate change, and we are seeing this manifested in schemes like the Climate Pledge (to make businesses net zero carbon by 2040), and B Corp certification (open only to businesses that meet very highest standards of environmental performance). As the green energy patent landscape becomes more crowded due to the growing number of new applications, it may become more difficult for aspiring green companies to establish freedom-to-operate while also meeting their climate obligations. Consequently, we are likely to see an increase in patent litigation around the world relating to the most successful green energy technologies.

Those who hold the patent ‘keys’ to the most powerful green energy technologies will be under intense scrutiny regarding how they use their monopoly rights. They will only need to ask Pfizer, AstraZeneca, and Moderna how holding the patents pertaining to life-changing technology can be both a blessing and a curse. There will be widespread hope that the companies with the most significant patent portfolios for green energy tech will use their power to lead the charge into a new, better world. Putting profit over planet in the 2020s is likely to be very bad for PR.

Happily, the proliferation of patents for green energy need not lead to the stifling of progress and can in fact enhance it. If companies view their patent rights as valuable bargaining chips which can be used to unlock the patented technology of their competitors, then they will be able to spend more of their budgets on research and building on the developments of others, and less on litigation (hurrah!).

So, for those operating in the green energy space, the age-old adage applies: the best defence is a good offence. By maintaining your own robust patent portfolio, you are likely to gain increased access to your competitors’ ground-breaking technologies. As we have seen throughout the pandemic, incredible results can be achieved when the brightest minds collaborate effectively to solve the world’s biggest challenges and we hope, like the recent quest for the COVID-19 vaccine, patents can help to lead the way.

1 There are differing views as to whether nuclear energy is “green”, but for completeness it is included here. Similarly, although non-fossil fuels (e.g. biofuels) are a renewable source of energy, they may not be considered to be “green” in the truest sense. Because they are both arguably “greener” than traditional fossil-fuel energy, both nuclear and non-fossil fuel technologies are included here along with the six fields of technology concerned with what are universally considered to be green energy sources: hydroelectric, solar thermal, the sea, photovoltaic, geothermal, and wind.