Since writing my article about the Welshman who unknowingly tossed the entire GDP of an Australasian country into his trash can, I’ve not once considered myself hard done by. The (daily) realisation that 8000 Bitcoins sit under a mountain of caterpillar-tracked black-bin refuse and industrial waste must be a tough pill to swallow.

Back in the 1950s, such a feat would have been nigh on impossible – not only because the country of Kiribati didn’t exist under that name until 1979 and so it didn’t technically have a GDP to throw away, nor because of the inexistence of “cryptocurrencies”, but rather that the size of a Hard Drive was such that you physically couldn’t fit it in your wheelie bin. At least not in one piece.

Previously, we discussed the rationale behind the development of new computer storage systems and the origins of the Hard Drive in a desk-sized account management system. In this article, we delve into the ways in which digital data makes its way onto whirring metal platters, and developments made following the technology’s conception.

Metal disks are mounted on a spindle and spun. As the disks rotate, magnetic properties of the disk surfaces may be adjusted by a movable transducer head positioned adjacent the disk surface.

Data is written by a transducer head controlled by an electric signal. The transducer head is moveable across the radius of the disk, to a position at which data should be recorded. The transducer head is energised by the electric signal, creating a small electric field local to the transducer head which adjusts the magnetic properties of the disk surface as it passes by. Concentric tracks, corresponding to writable areas of the surface, are divided into addressable sectors, these sectors further divided into magnetic bit spaces. Binary values may be stored by considering the magnetisation direction of adjacent bit spaces, and whether these directions are the same or different from one another (for example).

A Pat-ent on the Head

Over time, each element of the Hard Drive was developed in efforts to improve efficiency, storage capacity and reliability. One particular innovation relates to the flying magnetic transducer assembly of US Patent 3,823,416, with an effective filing date of 1 March 1973.

Irregularities in the disk surface, despite being only a few microinches, can affect this upward force, meaning that the fly height can deviate. During deviation, edges of the read head can contact the disk surface resulting in data corruption or machine down-time while the disk is repaired.

The patent proposed a new transducer head design with numerous benefits. The transducer assembly comprises a slider body including a plurality of downwardly depending longitudinal rails laterally spaced apart. The bottom surfaces of the two outer rails form the air bearing surface, and the spacing between the rails provides slots which act as paths for undesired air to bleed off from the air bearing surface during flying operations, without contributing to its effect.

As the disk begins to slow, the force exerted by the air bearing begins to fall, and the slider lowers towards the surface of the disk. Once the disk reaches a sufficiently slow rotational speed, the slider lands safely on the disk surface without risk of damage. 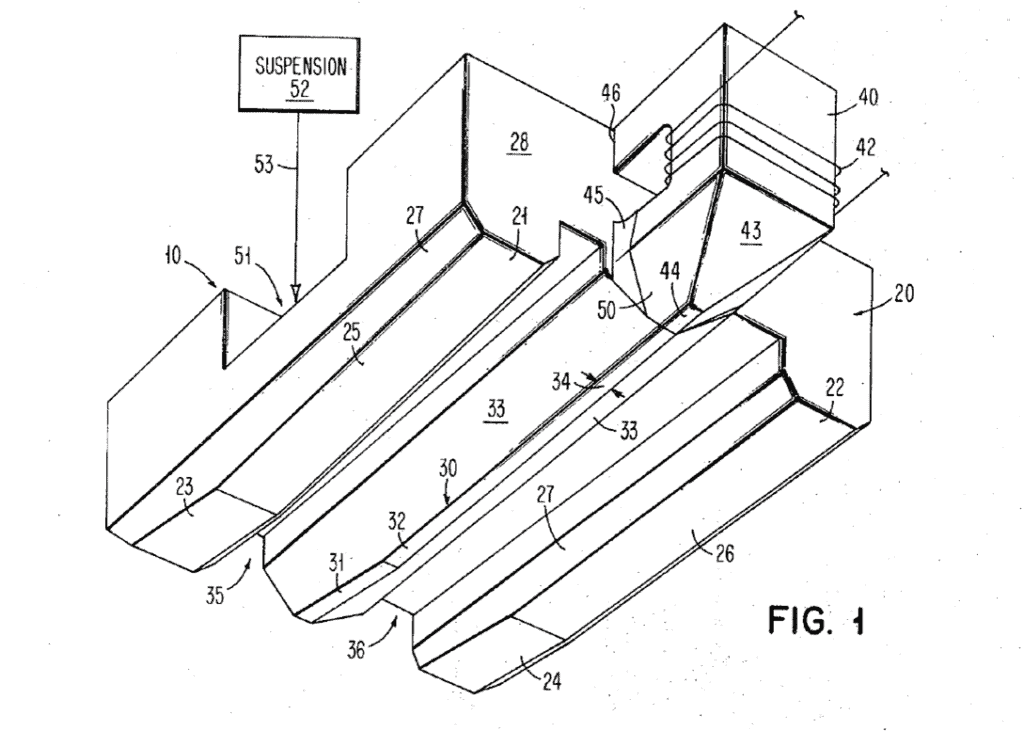 The arrangement of the rails allows excess air to escape when the pressure formed by the air bearing increases, allowing the read-head to remain at a constant fly height. The parallel rail configuration also allows the transducer head to be manufactured by a step-and-repeat machining operation sequence, simplifying manufacturing. The mass of the magnetic transducer totalled only 0.25g, requiring a balancing load of less than 20g – a vast reduction compared to around 400g in other drives at the time.

As in my previous article, the chart below summarises the number of magnetic storage device-related patent applications filed by each named company, this time between 1973 and 1983. Lens Patent Search was used to identify applications falling under IPC codes G11B 5/00 and G11B 11/00, relating to magnetic storage devices. As can be seen below, the landscape shifted somewhat from that in my previous article, and new players in the HDD technology space started to emerge. 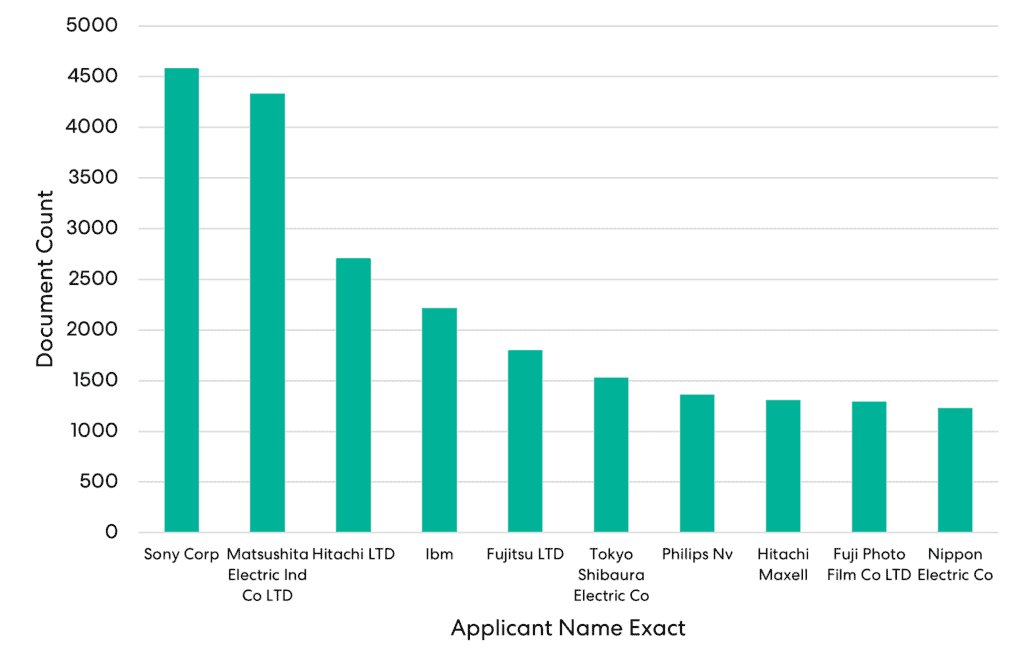 Sony appears as the top filer in this time period, despite not making the top 10 filers between 1954 and 1964, and Hitachi, who, in 2002, reached an agreement with IBM to combine their hard disk drive businesses and form Hitachi Global Storage Technologies (HGST), can be seen as the third highest filer. IBM were still filing large numbers of patent applications (around 5 times as many as those filed between 1954 and 1964) despite it being almost 2 decades since their first system went on sale, and Philips, one of the top filers in the previous article, remains a top filer 20 years later.

While this and other advancements in technology have helped allow for reliable, terabyte-capacity drives that can fit into modern thin-and-light laptops, I can’t help but feel that the Welshman might have been more inclined to at least check the drive was empty before tossing it if it meant dismantling it and carrying foot-long pieces of it out the door.

This is for general information only and does not constitute legal advice. Should you require advice on this or any other topic then please contact hlk@hlk-ip.com or your usual HLK advisor.