Historically, when looking for a solution to technical problems in the modern world, we have turned to nature for inspiration. In recent years, elephant trunks have been used as models in the development of robotic arms, the fins of humpback whales have been studied to improve the design of wind turbines and famously the shape of the Japanese high speed bullet trains were based on the beak of kingfishers. However, with nearly one quarter of all species presently at risk of extinction in the coming decades, how are we returning the favour? Taking inspiration from this year’s World Wildlife Day theme of “Sustaining All Life on Earth”, we have taken a look at some inventions developed to help with the protection and conservation of our wildlife.

One of the greatest threats to endangered animals, such as rhinos and elephants, is attacks from poachers attempting to take their horns and tusks. These attacks can lead to distress, injury and in serious cases death of the animal. In an attempt to tackle this issue, EP2992757B1 details a system that enables quick notification and location of attacks on these vulnerable animals. The system consists of two devices, one implanted in the removable part of the animal e.g. the horn or tusk (11), and one implanted in the animal’s main body (12). The devices are able to monitor the animal’s location and if they detect the animal is in a dangerous situation, an alarm is raised to a central unit (13) and the location of the animal is sent in real-time, allowing for a quick and targeted response and rescue (15). Further, the device (11) can be used to locate the horn or tusk if removed from the animal, helping in the capture and prosecution of the poachers. 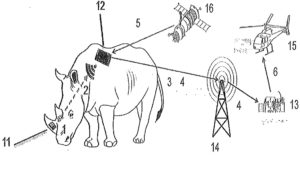 Climate change is also playing a role in the deterioration of our wildlife. In particular, coral reefs are being devastated by coral bleaching, a phenomenon caused by rising sea temperatures. Coral bleaching occurs when coral polyps expel the algae that live symbiotically in their tissue. As these algae provide the coral with up to 90% of their energy, this bleaching process can lead to coral death. Coral bleaching can also have terrible repercussions for many aquatic creatures that rely on the coral for food and shelter. US2018117613A describes an apparatus that protects and restores coral from the bleaching phenomenon. The apparatus pumps sea water into the air, creating a suspended vapour that acts as a protective layer above the water surface shielding the coral from the sun’s rays. The apparatus contains a pump that can be solar, wave or wind powered and can be self-contained within a buoy. The device is placed over or in the vicinity of coral reefs, and has sensors that respond to environmental stimuli, such as sunlight. This allows for mist levels to be adjusted accordingly, meaning at sunnier times, such as midday, the mist levels can be increased. 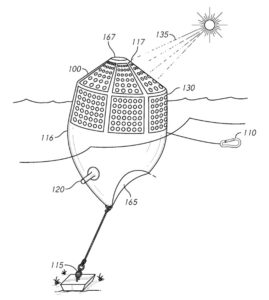 The effects of plastic pollution has also greatly impacted our wildlife populations, particularly in our oceans. Plastics are well known for their resistance to degradation and have a tendency to build up in our oceans leading to problems in marine animals including poisoning and death. While plastics are heavily utilized and essential in many areas of the modern world, their slow natural degradation has become a problem. Offering a possible solution to this is CN107794252A, which details development of a strain of bacteria capable of “eating” plastics. The genetically engineered bacteria is a strain of E.coli that biodegrades PET’s, a plastic commonly found in food and drink packaging. The bacteria is transfected with a plasmid that comprises a PET perhydrolase enzyme expression unit, which enables the bacteria to produce the enzyme PET hydrolase (PETase). The produced enzyme is capable of digesting the PET plastics.

To protect our wildlife, we must protect and conserve their habitats. An example of the terrible decimation of wildlife habitats is the recent bush fires of Southern Australia, which are reported to have killed almost half a billion animals and devastated the natural habitats of many more. The recent patent CN110433417A offers a retrofit aircraft (400) for targeted use in extinguishing forest and grassland fires. Fitted with a detachable spraying device (100), the aircraft is capable of performing fire patrols and undertaking early-warning fire inspection and prevention tasks. The invention has the added benefit that it is designed to have fewer gravity offset problems, allowing larger volumes of water to be transported to affected areas. 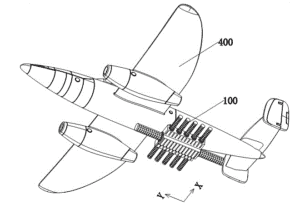 Inventions like these really give new meaning to patent protection.