Whilst the modern world increasingly distances us from nature, there remain certain activities during which encounters with nature are unavoidable and unpredictable. Surfers in certain parts of the world will be all too aware that encounters with sharks are an ever-present danger. So, what inventions exist to deter a shark from attacking a surfer? Perhaps unsurprisingly, a large number of patents and applications directed to this field originate in South Africa or Australia, four of which are described below.

This patent, from South Africa, relates to a surfboard with markings on its underside which mimic the belly markings of a killer whale. These markings are intended to deter an approach by a shark because when viewed from below, the surfboard resembles a killer whale. As sharks are typically wary of killer whales, an avoidance response might be evoked in a shark approaching such a surfboard, thus deterring the shark from attacking the surfer. 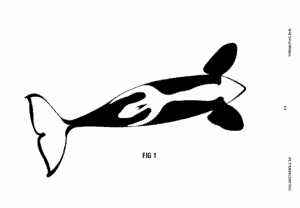 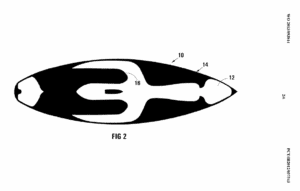 This document also describes how such markings may be used on a wetsuit to achieve the same effect. 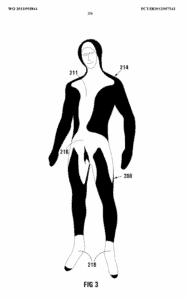 In a similar manner to the previous patent, ZA 2019/07557 B, also from South Africa, relates to the use of the markings of a killer whale on the underside of a surfboard. However, in this document, rather than the belly markings of a killer whale, a biologically accurate representation of an eye of an Orca is provided on the underside of the surfboard.

As an alternative solution, this patent is directed to a surfboard having a mirrored underside which, when viewed from below, mimics the reflective properties of the surface of the water. The surfboard may thereby be camouflaged by it reflective underside, such that the surfer’s presence may be at least partially obscured.

This document additionally describes how the reflective surface may reflect, to the shark, its own image. This may imitate the presence of another shark, potentially deterring any investigative approaches.  In instances where the underside of the surfboard is slightly concave, the reflective surface may magnify the shark’s own image, such that upon approaching, the shark will see the image of an approaching larger shark. 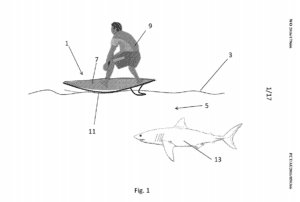 Now, assuming that the above inventions have not deterred a shark from attacking the surfer, what can protect a surfer in the event of a shark attack?

This document describes how shark attacks on humans are often caused by mistaken identity, meaning that after the first bite, when the nature of the victim is more accurately determined by the shark, the victim is often quickly released and not attacked further. It is often blood loss as a result of this first “test-bite” which leads to death, rather than a sustained attack.

As a first layer of defence, the texture of the outer layer of the composite fabric will be unfamiliar to a shark, which may allow the shark to more rapidly identify the nature of the surfer as a human and not the shark’s typical prey. Whilst this document admits that it is possible that a shark may follow through with its test-bite and may penetrate the fabric, the extent of any penetration will be reduced by the outer layer, and further reduced by the inner layer, of bite-resistant fabric. Accordingly, the injuries sustained by the surfer may be reduced by this composite fabric. 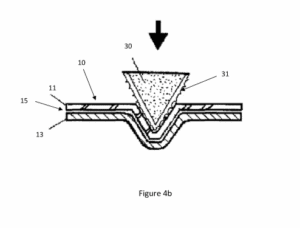 So, the next time you plan to surf in shark infested waters and would prefer to avoid becoming lunch, consider very carefully which, if any, of the above inventions you choose.