Having previously looked at wind turbine designs with a different appearance to the standard three-blade model, this article is going to focus on turbine designs aimed at reducing the costs of wind energy. In particular, these turbines are designed to have reduced construction and/or maintenance costs.

As wind turbines become increasingly popular, both on domestic and industrial scales, one of the biggest barriers to wind turbine installation is the high costs. Maintenance checks alone can cost between £100 and £200 a year depending on turbine size, with repairs varying between £1000 and £2000. Installing a turbine is even pricier, ranging from £7000 to £70000. With a lifetime of 20 to 25 years, those costs can really rack up! Take a look at these inventions aiming to make wind turbines cheaper:

CN102305196A discloses an invention with multiple, smaller turbines rather than one large turbine. As a result, the blades used in the turbines are much shorter which allows the height of the tower to be reduced. The shorter tower results in reduced construction costs, and damage over time is less likely because the shorter blades will deflect less during use. 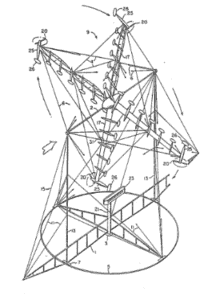 US4735552A discloses a wind turbine which rotates around a horizontal axis. This alternative design has a reduced weight power generating components, with turbines driven at high speed. This eliminates the need for heavy set up gears, reducing construction costs. This is in addition to the construction cost reduction arising from using lighter, cheaper components. 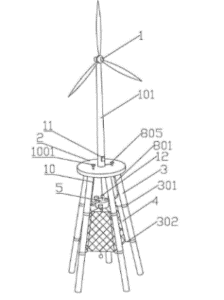 CN109076997A discloses an offshore wind turbine where the net cage equipment present underneath is integrated with the turbine itself. This net is present to allow for fish farming in the same area as the offshore wind farm, in order to better improve the economic benefits of offshore wind farms. By having the cage and power generation equipment manufactured together, rather than as two separate components, the cost of installing the offshore turbines is reduced.