The problem with conventional plastics

Convenient, cheap and readily available, we all know how much single-use plastic we each use in day-to-day life. Worryingly, 55% of plastic waste is discarded globally into landfill or the natural environment [1]. In the last year alone, up to 48 million tonnes of plastic was disposed of [2], and it is estimated that 12,000 million tonnes of waste plastic will have been discarded by 2050 [3]. Meanwhile, only 6% of plastic waste is recycled, and 9% is incinerated. By far the largest contribution to plastic waste comes from the packaging sector (47%), but other main contributors are the textile (14%) and consumer/institutional product sectors (12%) [1]. As is well documented, discarded plastic waste is a threat to the environment and ecosystems, as plastics can take centuries to naturally decay.

Accordingly, there is an urgent need to develop plastics and recycling methods which have a reduced environmental impact. The European Patent Office (EPO) has recently released a detailed report, titled “Patents for tomorrow’s plastics”, in which global patent data has been used to analyse trends in plastics innovation. In this report, we take a look at some of the key trends identified by the EPO.

The EPO’s report focuses on technologies that may help provide a more “circular” plastics industry, as opposed to the linear economy we know today, where the plastics are used once and discarded. The reported trends have been calculated from analysing the number of International Patent Families (IPFs) – each family directed to a single invention and including applications filed and published at several patent offices around the world – for each technology.

A big positive takeaway from the report is that the research is happening and is growing. The report discusses two main areas of development – plastic recycling and alternative plastics.

The plastic recycling area covers all aspects of recycling, including waste recovery (collection, cleaning and sorting) as well as mechanical, chemical and biological recycling methods.

As can be seen from Figure 1 below, the US and Europe have been the main global innovators in each of the two research areas between 2010-2019, each contributing over 30% of the patent families. The relative specialism in a particular area of technology has also been discussed in the report, by calculating the number of patent families in the area relative to those in all fields of technology. According to the analysis, globally, the US has a strong specialism in both recycling and alternative plastics. Within Europe, France, the UK, Italy, the Netherlands and Belgium also stand out for their specialisation in these technologies. 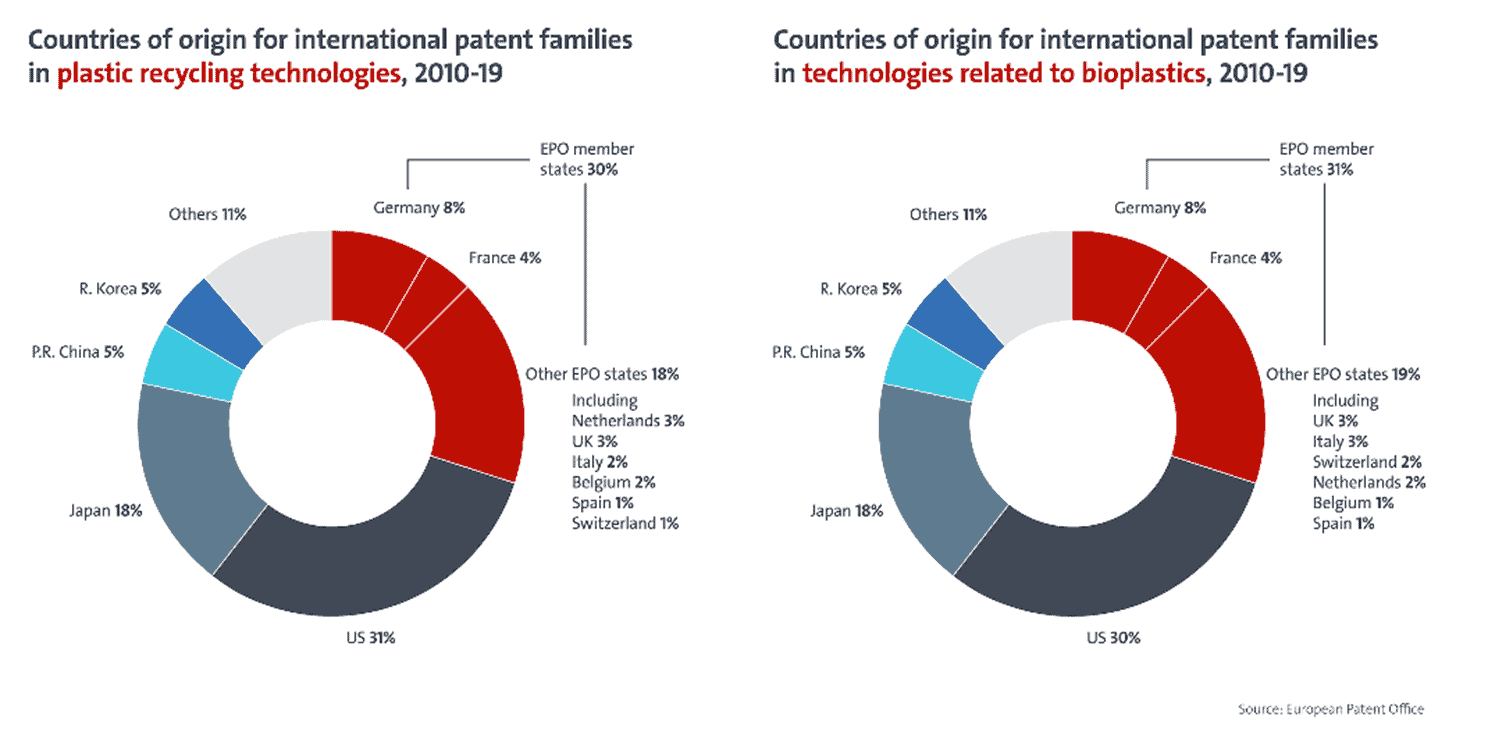 Mechanical recycling is the simplest and most common recycling method, and research in this area was dominant until the 1990s. Mechanical recycling involves the melting and reforming of thermoplastics to manufacture new products. The main downside of mechanical recycling is that each time a polymer is reprocessed, the quality degrades, and impurities are incorporated into the mixture. Research in this area therefore tends to focus on how to improve the quality of reprocessed product. For instance, the use of engineered filler materials, such as compatibilizers, have been found to improve recycled and blended polymer properties.

As can be seen from Figure 2, research into chemical and biological recycling methods has now overtaken traditional mechanical methods. Chemical recycling involves the use of thermal treatments, such as cracking and pyrolysis, which decompose plastics into shorter molecules. It is possible to break a polymer down into its constituent monomers and to repolymerise them to make a product with virgin-like quality. However, in practice, most of the shorter molecules are typically used as feedstock for other chemical reactions or incinerated for energy recovery.

Biological recycling is a more recent and promising development and involves depolymerisation using enzymes or other organisms to selectively break down polymers into monomers for reuse. This overcomes the issue of degradation of polymer properties faced by conventional recycling. The EPO’s report briefly notes that French company Carbios has developed a biological recycling process and is looking to develop a commercial recycling programme. Carbios own a large number of patents and applications worldwide, including EP2922906B1, which claims a method for recycling a plastic product comprising using a cutinase enzyme to depolymerise PET.

As can be seen from Figure 2, there also continues to be innovation in the waste recovery sector, with most of the focus being on sorting and separation of waste. 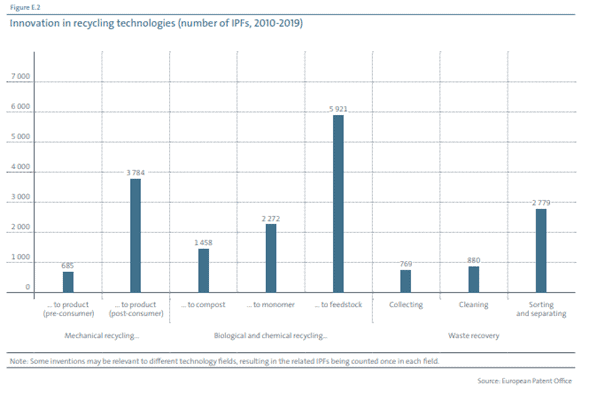 Research into bioplastics has been active since the late 1980s. Bioplastics fall into several categories: chemically modified natural biopolymers and polymers synthesized using biomass sources; and biodegradable plastics, which may be fossil-based or bio-based. Figure 3 shows a range of materials and their properties which allow them to be categorized as “bioplastics”.

It is important to note that not all bioplastics are biodegradable, as biodegradability is a property which depends on the chemical structure of the polymer. To be biodegradable, the polymer must be able to be disintegrated into natural elements (such as carbon dioxide and water vapor) with the help of fungi, bacteria, or other biological processes. In fact, some fossil-based plastics (such as PBAT) are also biodegradable. 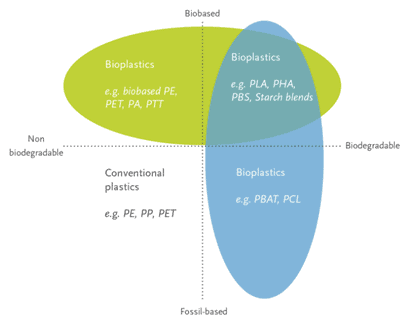 Figure 3. Diagram showing a range of bioplastics and their properties (from the European Bioplastics association)

Among other bio-based polymers, polymers from bio-sourced monomers are the fastest-growing field, although many of these are not biodegradable. Most of the patents in this field relate to “drop-in plastics” (i.e., Bio-PE, Bio-PET, Bio-PA or Bio-PP), in which the monomers are made from renewable resources, most commonly from bioethanol. They have the same chemical structure as their mineral oil-based counterparts, resulting in the same properties and same recyclability, but provide a reduction in emissions of greenhouse gases and consumption of non-renewable resources during their production.

The report also highlights some interesting alternative plastic success stories, including a biodegradable bioplastic grown from mushroom mycelia, which can be moulded into multiple shapes and used in a wide variety of applications. Ecovative Design own a broad range of patents and applications in this area, including EP2094856B1, which claims a method of making a composite material including a step of allowing a fungus to digest a nutrient material to form a network of interconnected mycelia cells. 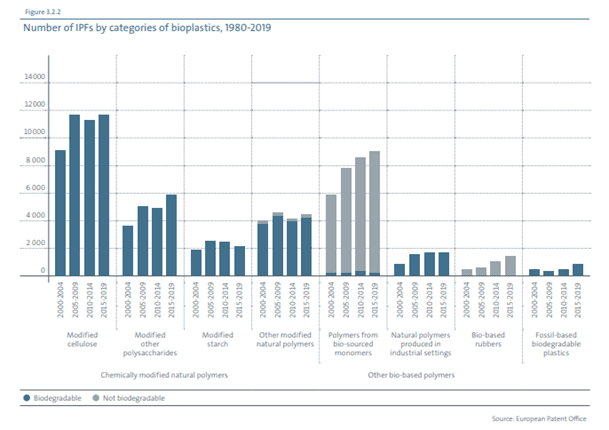 Figure 4. Number of International Patent Families for each category of bioplastics

Lots of work still needs to be done to reach a fully circular plastics economy. However, it is clear that there is a great deal of research happening, and that progress is being made across all areas of the plastics manufacture and recycling industry. As can be seen from the EPO’s report, patent filings provide a powerful tool for the analysis of research trends, but they will also play an important part in the commercial development of new materials and processes. Hopefully we will soon see many of these innovations in our day-to-day life!