We all love our animal companions, but have you ever wondered what new inventions could benefit them? To celebrate National Pet Month, we take a look at some pet friendly inventions that will get your tails wagging!

It’s a picturesque Sunday morning. As you walk through the countryside and admire the outstanding natural beauty, you stop briefly and think to yourself -“if only my pet snake were here to enjoy this moment with me”.

Fortunately thanks to the “Collar Apparatus Enabling Secure Handling of a Snake by Tether”, you will never have to leave the house without your beloved snake again.

It is noted in this patent that a standard animal collar would not be suitable for snakes as they have “no external appendages”, and that snakes also gradually change in circumference as they grow. 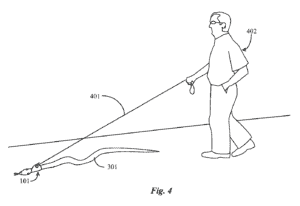 This “pet-sitting drone” is able to monitor and interact with a pet when the owner is away. It is configured to make a behavioural assessment of the pet, taking into account, for example, its location, expressions, and movements, and is then able to select an activity program based on the pet’s behaviour, for example, training commands, obedience training or playing fetch.

The drone is also able to communicate with smart home appliances. For example, it may instruct a smart pet feeder to dispense food or water, or activate a ball thrower or a toy to entertain the pet. The drone can also open doors, and adjust the temperature and lighting levels in a home in response to the pet’s needs.

The drone may also give the pet a “vocalised warning” in response to particular destructive behaviours, which may include eating your furniture. 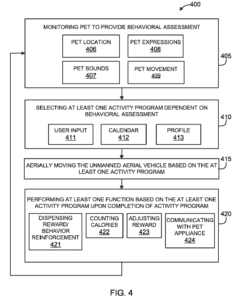 This patent relates to a “chromatically selective cat flap”, that is able to admit a cat with ginger fur, but not a cat with black fur. It seems the motivation for this invention was the theft of the ginger cat’s food by the next door neighbour’s “younger and more agile” black cat, and the technical problem that the invention was considered to be solving was “how to let “Ginger” in, but exclude the black cat who belongs next door”.

The cat flap was engineered such that it would permit entry of a cat based on the energy of the radiation reflected from its fur, and thus allowed “considerable feline rivalry” to be avoided. 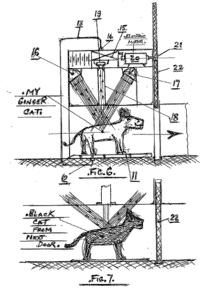 Activity monitors are popular gadgets that allow individuals to track their health, sleep quality, and activity levels. But did you know you can also get one for your dog?

The FitBark® attaches to the collar of your dog, and monitors metrics such as calories burned, distance walked, and overall health and behaviour. It is also able to link to other activity monitors, allowing you and your dog to track your progress together!

Finally, with summer just around the corner, you may want to consider investing in the “Pet sunglasses system”. Not only does this invention protect your pet’s eyes and prevent cataracts, but your pet will also look ridiculously cool.

So if you have a pet with feathers, fur or in some cases, scales, just remember, there’s an invention out there to keep them happy!