In this second article we examine how the requirement of sufficiency is applied to AI inventions, including the various types of data that may need to be included in the application.

Article 83 of the EPC requires that “[t]he European Patent Application shall disclose the invention in a manner sufficiently clear and complete for it to be carried out by a person skilled in the art”. EPO Examiners must therefore consider whether there is enough information in a patent application to allow the skilled person to reproduce the invention, and the application must provide sufficient information that the burden on the skilled person is not undue and that no inventive skill is required to work the invention.

For AI inventions, the EPO Examiner may ask:

Lessons From the Field of Chemistry

Objections under Article 83 EPC may be raised against applications concerning AI because it is not always immediately clear how or why an AI invention works.

For example, a well thought-out training dataset and reward function may lead you to a machine of remarkable utility without the inventor ever truly understanding why the numbers underlying that particular machine are so successful.

Attorneys working in chemistry have long dealt with the problem of an inventor not knowing why composition A has better properties than composition B, or why yield of a particular reaction product X increases when you change reaction variable Y, etc. – nevertheless lots of experiments may show that such an invention works. Although it may be relatively easy for a chemist to make a new composition as such, it is much more difficult to make new compositions that have a desired new or improved result. Essentially, the outcome of a new chemical reaction is unpredictable.

These experiences in chemistry have parallels in the field of AI. For example, consider an image-classification AI machine learning method. The machine’s focus is getting to the right answer as opposed to understanding the problem itself. This means that it may not be apparent why there is such a strong weighting associated with a particular combination of pixels in a particular stage of a neural network. But by testing the machine, and checking the results independently, the inventor can be sure that their AI machine is a good one, in just the same way that a drug which results in increased survival is a good drug, even if the precise mechanism underlying its efficacy is not known.

Therefore, we now recommend using experimental data and comparative tests in applications relating to AI, as is already common in chemistry applications. According to EPO examination guidelines and case law, it is better to include both experimental data and comparative tests in the patent application itself. Later-filed evidence can be taken into consideration, even if it was not included in the original application, but only under certain conditions. Later-filed evidence may not serve as the sole basis to establish that the application solves the problem it sets out to solve; it can only be used to back up findings in the patent application, if it is already credible from the application that the problem is indeed solved.

Consider, for example, that in order for a particular patent application directed to a new chemical composition to meet the requirement of sufficiency, the patent application must provide enough information for the skilled person to be able to produce the composition. It is often necessary to include full experimental details of at least one way of producing a particular product, for example, including starting materials, apparatus and reaction conditions. For AI inventions, this is comparable to describing the principles underlying the data included in the dataset, and any assumptions or parameters built into the AI model.

Consider another scenario which concerns a chemical application where a particular result is limiting on the scope of the claims. For example, the claims may be directed to a method that provides a particular result, or to use of a composition for a particular purpose. In such cases, in addition to explaining how the method or use is carried out, it is generally necessary to provide data to prove that the claimed result is actually obtained by the invention in order to satisfy sufficiency requirements. For AI inventions, a comparable example would be a machine designed to better distinguish between different types of animal in an image. If this result is indeed achieved, then the application should provide evidence of this.

A requirement of sufficiency is that the invention can be performed across substantially the whole of the area claimed and, in chemistry, without clearly knowing why a new chemical composition works better than already known compositions, it can be difficult to justify a broad definition of the new composition in the claims. Nevertheless, the applicant may want to obtain patent protection covering similar compositions that are expected to show similar improvements. In practice, when chemical claims are drafted broadly, Examiners can object that it is not plausible that a technical effect that has been demonstrated for one particular composition would be obtained for all embodiments falling within the scope of the claims. In some circumstances, plausibility of different embodiments can be argued based on known scientific principles. However, additional experimental data relating to a number of embodiments across the scope of the claims can be helpful to overcome any concerns the Examiner may have.

We can also apply these considerations to AI inventions. For example, a classifier which distinguishes between different types of animal in an image may use a training dataset including pictures of cats and dogs, and a particular model embodying a set of assumptions. In this example, the model is not just effective, but also fast and lightweight in terms of processing resources. The applicant would like to claim the model as a classifier per se, for categorising any two objects into two groups. However, an Examiner may not consider such a broad invention to be plausible based on data relating only to cats and dogs. For example, it is possible that there is something special about cat and dog images which isn’t true of other sets of images, such as of bolts and screws or oil slicks and rainbows. Therefore, including diverse examples of datasets in the application may help to show plausibility in such an example.

As an example, an application undergoing prosecution at the EPO relates to processing images of physical samples on a production line to identify defects on the imaged physical samples, and the claims explicitly define executing unsupervised training of a generator neural network: 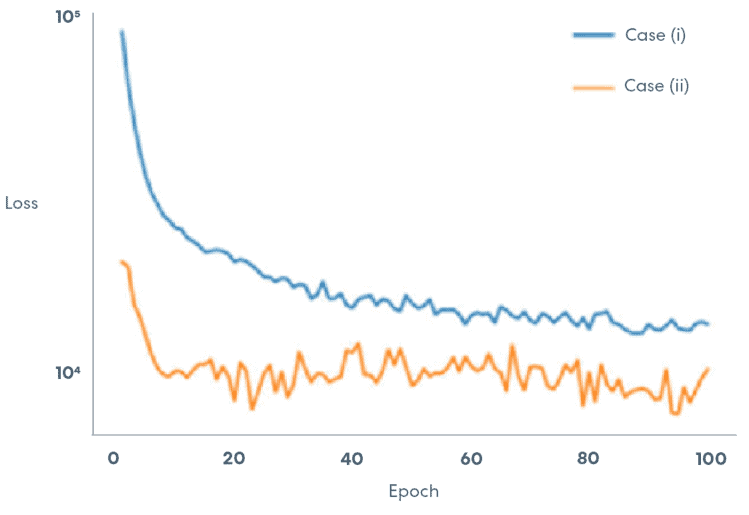 Comparative test data was included in the specification as filed, demonstrating the ability of the invention to decrease losses faster than prior art AI methods. Reduced losses in this context refers to a method that is particularly effective at training the generator neural network to remove defects from input images. This is shown in the graph below: 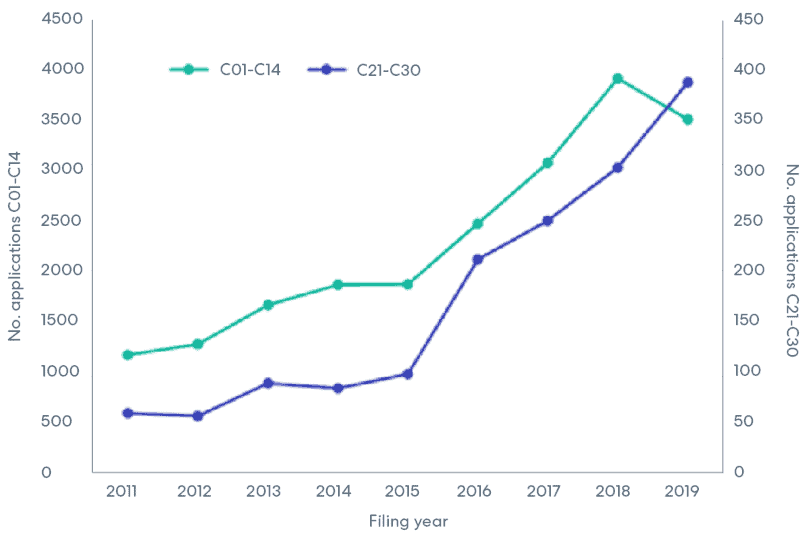 AI is now also finding more and more applications in Chemistry itself. For example, the below figure shows the growth in the number of patent applications filed worldwide in the CPC classifications C01-C14 (which relate to traditional Chemistry) and C21-C30 (which relate to Metallurgy) and which also include the words “artificial intelligence” or “machine learning” in the description.
In many of these applications, AI methods are used to identify existing or new chemicals, compositions or materials which have desirable properties. For example, an AI machine may identify existing drugs, known for treating one particular disease, as being suitable for use in the treatment of an unrelated disease. Alternatively, AI may be used to design new materials which have improved mechanical or electrical properties. In such cases, care must be taken to ensure that the patent application sufficiently describes both the AI and the chemical aspects of the invention.

As an example that also illustrates the potential issues discussed above, one application we have identified concerns an AI method for designing a material for an aircraft component. A neural network is trained to correlate structural features of alloys with material properties, such as yield strength, using a training data set of images of alloy structures having varied compositions and properties.
The claimed method uses the neural network to identify a set of structural features capable of achieving a desired combination of properties for a particular application. The application also attempts to claim a step of manufacturing an alloy having the identified structure and, thus, the desired properties.

The patent application has received sufficiency objections in Europe under Article 83 EPC. First, the Examiner has objected that generic theoretical models linking alloy properties to structural features are not known for alloy systems in general, nor are they known for the specific type of titanium-based alloy provided in the Examples of the application. The Examiner has also doubted that the AI model described can predict optimized microstructures for an alloy having desired properties. Instead, the Examiner thinks that the AI could be used to analyse an image of a previously unknown alloy structure and predict its properties, which is a fundamentally different task. The Examiner has therefore objected that excessive experimentation would still be required for the skilled person to determine suitable structural features for a given set of properties. Second, the EPO Examiner has objected that the application does not explain how to manufacture an alloy having a particular structure identified by the AI. The Examiner notes that developing a manufacturing method for a particular alloy requires extensive experimentation and that the skilled person would also need to first consider whether any structure output by the AI was even chemically or physically feasible.

To decrease the chances of a sufficiency objection, we recommend that all relevant data (including experimental and comparative data) is included in the application where this is available to the applicant, particularly data that distinguishes the invention from the prior art known to the inventor.