The European Patent Office has developed a consistent approach to the examination of patent applications relating to alloys, taking into consideration the unique nature of these important industrial materials.

Alloys – not just a chemical mixture

At the most fundamental level, an alloy is a metallic material which contains at least one metal and at least one other element (whether metal or non-metal). However, an alloy is much more than just a chemical mixture characterised by the concentration of each element present.

While some simple alloys consist of single-phase solid solutions of alloying elements in a metal matrix, many alloy systems can form multiple, distinct solid phases having different atomic arrangements and/or chemical compositions. The particular phases which form in a given alloy under a given set of conditions depend on factors such as the relative stability of different crystal structures for the metal matrix, the concentration- and temperature-dependence of alloying element solubility and the relative ease with which atoms can diffuse through both the melt and the solid. 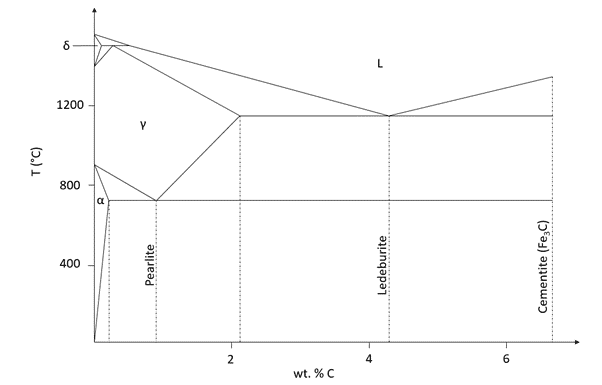 Schematic equilibrium phase diagram illustrating some of the different phases formed in the Fe-C alloy system.

The quantity and spatial arrangement of each phase present in an alloy characterises what is known as its microstructure. The microstructure of an alloy determines to a large extent its physical properties (e.g. strength, flexibility or electrical conductivity) and is highly sensitive to changes in the chemical composition, solidification processes and any thermo-mechanical treatments applied during manufacture of a component. Even single-phase alloys can be produced in single-crystal, polycrystalline and amorphous forms.

Alloys therefore form a special class of chemical mixtures which are defined not only in terms of their chemical composition but also their physical structure, properties and often their method of manufacture, and this is taken into account by the EPO when assessing patentability. Clarity and novelty are two particular areas where EPO alloy practice diverges from other fields. In this article, we consider the EPO’s practice as regards clarity; novelty is covered in depth in a separate article.

Article 84 EPC requires that the claims of a patent application are clear, concise and supported by the description. In many respects, the clarity of alloy claims is assessed in the same way as any other type of claim. However, the EPO has developed alloy-specific practices regarding the clarity of elemental compositions.

Chemical compositions are usually defined in patent applications using the terms comprising or consisting of. Comprising is normally interpreted by the EPO to mean including, but not limited to. For example, the following claim covers compositions which include components A, B and C, as well as compositions also including any other components such as D.

Composition comprising A, B and C.

Consisting of, in contrast, is given a closed meaning which excludes the possible presence of any other components. For example, the following claim only covers compositions made up of A, B and C and does not cover a composition also including D.

Composition consisting of A, B and C.

The EPO also usually permits use of the phrase consisting essentially of to mean that further components can be present, but only to the extent that these components do not materially affect the essential characteristics of the composition.

In normal EPO practice, any of these claim formulations can be permissible, although they will be afforded different interpretations. This practice is, however, not followed when alloy claims are examined.

It is well known that the microstructure and properties of an alloy are highly sensitive to even small changes in the alloy composition. For example, the properties of microalloyed steels depend on the inclusion of alloying elements in amounts less than about 0.1 wt. %. A change in concentration of one element by only a hundredth of a percent can be enough to cause entirely new phases to precipitate or to restrict the movement of crystalline defects which provide metals with ductility. The EPO therefore does not accept alloy claims which are defined in terms of open-ended compositions. Instead, the composition must be 100 % defined in a closed form. Of course, one way to achieve a closed-form composition is to use consisting of, as follows.

Alloy consisting of A, B and C.

Alternatively, use of comprising is also permissible as long as a balance of the composition is defined. In this case, the specification of a balancing element excludes the possible presence of any other elements. Thus, the following claim has effectively the same meaning as a claim using consisting of.

Alloy comprising A and B, the balance being C.

The use of comprising alone, without definition of a balance, is not acceptable and will trigger an objection under Article 84 EPC.

The EPO also does not permit use of the phrase consisting essentially of when defining an alloy composition. However, it is permissible to specify the presence of the usual impurities, most commonly as part of the balance. This is because the EPO accepts that it is not practically possible to manufacture an alloy which does not contain at least some oxygen, nitrogen, etc., at impurity levels. The following claim formulations are therefore also acceptable.

Alloy consisting of A, B, C and the usual impurities.

Alloy comprising A and B, the balance being C and the usual impurities.

It is not normally necessary to specify which impurities are meant or to provide upper limits for the impurity levels. However, if particular impurities and limits are disclosed in the application, an EPO examiner may consider these to be essential features of the invention and insist that they are recited in the claims. Care should therefore be taken when drafting applications to ensure that any disclosed impurity levels are not overly restrictive.

Not only must alloy compositions be defined using closed-form language, the EPO also requires that compositions are 100 % defined in the independent claims. This means that the following claim set, in which further alloying elements are specified in dependent claims, is not acceptable.

In such circumstances, the EPO will object under Article 84 EPC and require that claim 2 is deleted or the subject-matter of claim 2 is incorporated into claim 1. So as not to restrict the scope of protection (unless necessary for other reasons), this situation can usually be remedied by including component D as an optional element in claim 1, as follows.

Of course, claims will usually specify the relative amounts of the components present. The optional nature of an element can therefore also be expressed using a range lacking a lower limit, such as up to X %, less than Y %, etc., as follows.

In contrast to some national offices, the EPO does not necessarily insist on the specification of a lower limit for ranges (unless the lower limit is considered to be an essential feature of the invention).

The EPO defines essential features as those features of a claim necessary for achieving a technical effect underlying the solution of the technical problem with which the application is concerned. An independent claim which does not contain all features explicitly described in the application as being necessary to carry out the invention will trigger an objection under Article 84 EPC.

Since the properties of most alloys are highly dependent on the alloy microstructure, a European examiner is likely to object that a claim which defines an alloy solely in terms of its chemical composition lacks essential features. It is therefore normally necessary to define the claimed alloy microstructure to at least some extent. In some applications, this may be as simple as specifying that the alloy is amorphous, nanocrystalline, ferritic, etc. However, a more detailed microstructural characterisation can be necessary, including specifying the main microstructural phases present and their relative amounts, the size, distribution and composition of any precipitates, or the presence of any compositional gradients through a component (e.g. a metal sheet) formed from the alloy.

It is therefore important that alloy applications include descriptions of microstructural observations, along with explanations as to why any particular microstructural features are important (or not) to the invention. If a particular microstructural feature is observed in all of the examples, and there is no explanation as to why said feature does not contribute to the effect underlying the invention, it can sometimes be difficult to convince European examiners that such a feature is not essential and should not be included in the claims.

It is also vital that the measurement methods used for any microstructural characterisation steps are described fully. Otherwise, European examiners can object that references to microstructural features in the claims render the scope of protection unclear. For example, if a claim to a steel specifies a microstructure in terms of percentages of ferrite, austenite, martensite and bainite present, the application should contain a clear explanation of how each of these phases is to be identified, including how samples are prepared, the measurement equipment and settings used, how phases are distinguished from one another, and any calculations which must be performed.

Michael Ford is a Senior Associate in our Materials Group with extensive experience of protecting alloy inventions in Europe. If you would like further advice on this topic, please get in touch.