Metallurgy has been of huge technological importance to humanity since the start of the Bronze Age, culminating in the explosion of innovation in the iron and steel industry during the first and second Industrial Revolutions. While we are currently living through Industry 4.0, with an ever-increasing reliance on digital technologies and biotech developments, metals remain one of the most-traded commodities and iron ore is the most-mined material after sand, gravel and cement components. The mass of steel produced globally in a year outstrips silicon production by a factor of over two hundred. Metallurgy is therefore still vitally important to the world economy.

Industrial metallurgy is dominated by the steel industry, with ferrous alloys continuing to find widespread use in construction, manufacturing and electrical applications. However, interest in non-ferrous alloys is growing, particularly as manufacturers aim to produce lighter structures (to reduce fuel consumption in the automobile or aerospace industries, for example) or seek out materials which can withstand extreme environments (from experimental fusion reactor cores to modern gas turbine engines).

Non-ferrous metallurgy is a broad field and covers a large number of materials and processes, from established industries such as aluminium and titanium to more recently developed high-entropy alloys. In this article, we look at patent filing trends for non-ferrous metals to build up a picture of how this technology area is progressing across the board.

Our IP Analytics team carried out a search for published European patent applications in the Cooperative Patent Classification C22C (Alloys) between 2012 and the present. The results were broken down for each of the sub-classifications 1/00 to 32/00 relating to non-ferrous alloys. We then analysed the total number of applications published, the top 10 filers in each area, and the publication trends over time.

As can be seen from Figure 1, 1/00 (Making non-ferrous alloys) was the sub-classification in which the largest number of European applications published in the past decade. This is perhaps not surprising, since the classification covers metallurgical processes which could be applied to many different base metals.

Beyond 1/00, however, each sub-classification focuses on a particular base metal or type of alloy. Of this group, aluminium-based alloys (21/00) come out on top, closely followed by nickel and cobalt which are grouped together in sub-classification 19/00. This highlights the continued industrial importance of aluminium-based alloys as lightweight and corrosion-resistance structural materials, particularly for the automotive and aerospace sectors. Nickel and cobalt are also particularly important in aerospace, given that nickel- and cobalt-based superalloys are well-suited to withstand the high temperatures achieved in the hot sections of gas turbine engines. Aluminium, nickel and cobalt all find use in magnetic alloys (such as the Alnico alloy family), while nickel also forms the base of many shape memory alloys.  Cobalt-based alloys are well-known for superior wear and/or corrosion resistance, and therefore find diverse applications in machine parts, dentistry and orthopaedic prostheses such as artificial hips.

Other areas where we found significant numbers of patent filings in Europe include copper-based alloys (9/00), the noble metals (5/00), alloys based on metal compounds (29/00 and 32/00) such as carbides, oxides or nitrides, and titanium-based alloys (14/00). Sub-classification 29/00 also includes cermets, which are a special type of composite combining ceramic materials and metals.

Areas where we found very few applications include lead-based alloys (11/00), cadmium-based alloys (20/00), manganese-based alloys (22/00), alloys based on alkali or alkaline earth metals (24/00) and beryllium-based alloys (25/00), suggesting that these alloys currently have little industrial importance or that less innovation is happening in these technical fields. 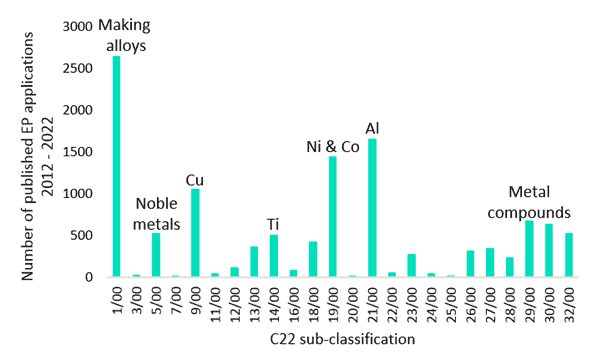 The non-ferrous alloys classification in Europe is dominated by Japanese corporations such as Nippon Steel, Mitsubishi, Hitachi Metals/Chemical, Sumitomo and JFE Holdings, several of which are perhaps better known for steel production. Other big corporations include Siemens, General Electric, Raytheon Technologies and Constellium. The ranking of the various filers, however, varies quite strongly with technical field. 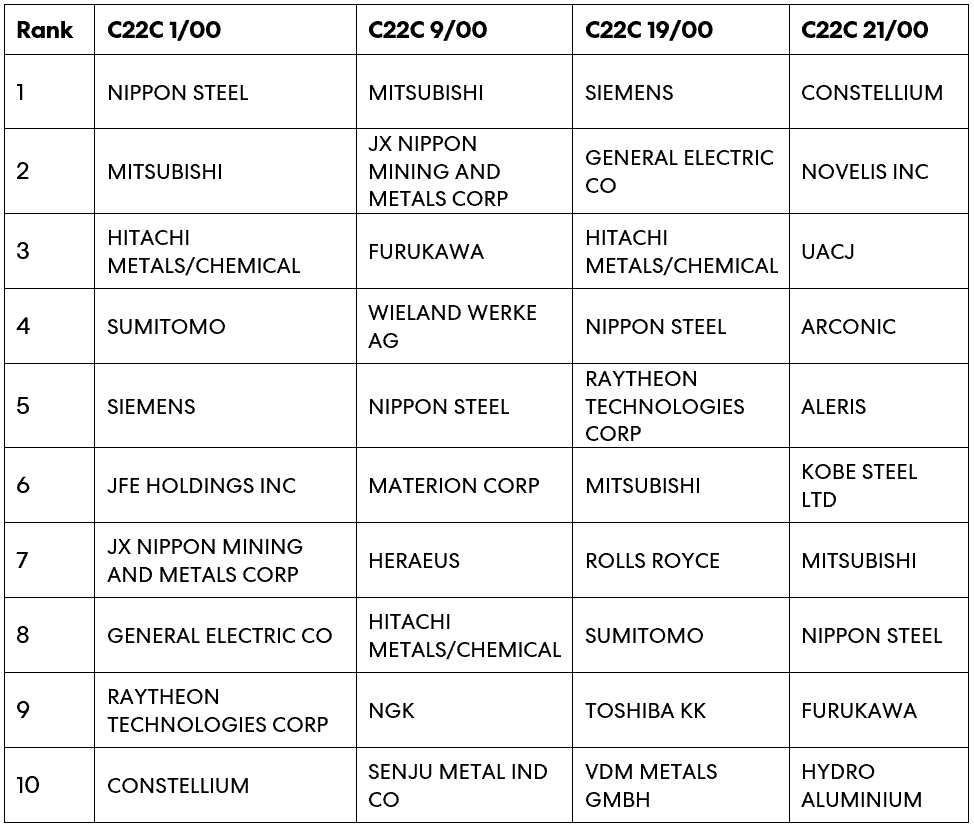 As can be seen in Figure 2, there has been a strong growth in the number of applications filed for aluminium-based alloys and alloys based on metal compounds (such as metal carbides, oxides, nitrides, etc.), as well as metallurgical processes used to make non-ferrous alloys, between 2012 and today.

The increasing numbers of filings for aluminium-based alloys may well reflect the growing need for lightweight materials for the transportation, aerospace and defence industries.  Many jurisdictions have implemented strict regulations to reduce CO2 emissions from cars, for example, and this had led to manufacturers seeking ever lighter materials to reduce weight and increase fuel efficiency. Reductions in weight are also necessary to improve battery power consumption in electric vehicles.

Alloys based on metal compounds often exhibit superior strength and hardness, which make them able to withstand difficult environments. Metal carbides, nitrides and carbonitrides, for example, are often used in cutting tools, milling and grinding machinery, gears, and radiation shielding.

Cermets also fall into the same classification as the compounds and combine the properties of ceramics (such as high temperature resistance and hardness) and metals (such as toughness and the ability to deform plastically). Cermets are being used increasingly in the manufacture of high-temperature electrical components (such as resistors), as well as replacements for metal carbides or nitrides in cutting tools or in automotive and aerospace applications. 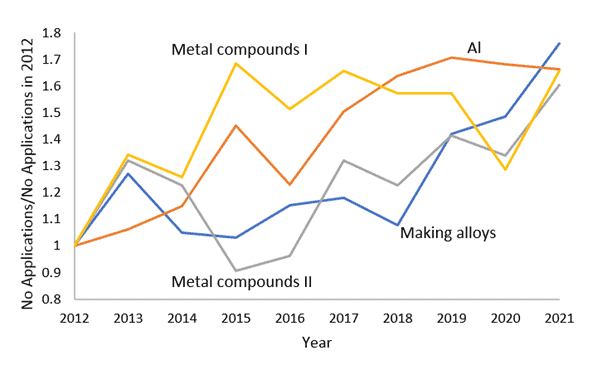 Figure 2. Number of published European patent applications for certain C22C CPC sub-classifications per year between 2012 and 2021, normalised by the corresponding number of applications published in 2012.

As can be seen in Figure 3, one area where we see a marked reduction in the number of filings is for sub-classification 26/00, which covers alloys containing diamond, as well as alloys containing fullerenes, carbon nanotubes and boron nitrides. Such nanostructured materials were a hot topic in academic research at the beginning of the 21st century, but it appears that few of these materials have found large-scale industrial applications in metallurgy. 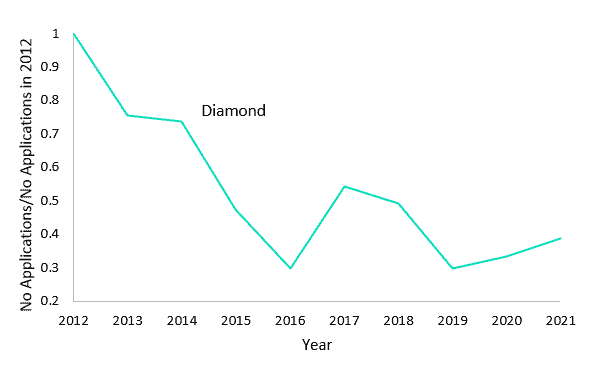 Figure 3. Number of published European patent applications for the C22C 26/00 sub-classification per year between 2012 and 2021, normalised by the corresponding number of applications published in 2012.

We also noticed a strong peak around 2017 for filings in the 30/00 sub-classification, followed by a gradual tailing off in filing numbers, as shown in Figure 4. This classification relates to non-ferrous alloys containing less than 50% by weight of each component, and therefore covers so-called multicomponent or high-entropy alloys. Such alloys are still the focus of intense research in academia, as they can exhibit novel mechanical and electrical properties not seen in traditional alloys where one base element forms the bulk of the material. However, the reduction in patent filings suggests that significant industrial applications for these properties have not yet been identified. 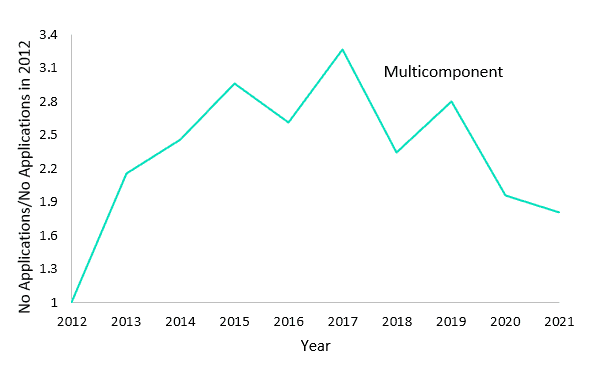 Figure 4.  Number of published European patent applications for the C22C 30/00 sub-classification per year between 2012 and 2021, normalised by the corresponding number of applications published in 2012.

Michael Ford is a Senior Associate in our Materials Group with extensive experience of protecting alloy inventions in Europe. If you would like further advice on this topic, please get in touch.

HLK Ranked Gold in Every Category by Financial Times

Our specialist teams work in tandem with one another to provide a seamless service across a wide range of scientific areas. Subsequently, our attorneys’ and our paralegals’ esteemed work was highlighted in all six technology areas featured in the report.