National Beer Day, an annual event established on 15 June 2015 in celebration of beer in the UK, might not be a national holiday, but there is no better reason to reach for a bottle of your favourite lager or local IPA. As the label will tell you, lagers are traditionally best served chilled, and some brands even sport frosted taps in bars and restaurants designed to chill the contents down and make for a crisp first sip. While your bartender fosters up (pun, and future puns, intended) a pint chilled to perhaps single digits of ˚C, it pales in comparison to the temperatures achieved by the beer super chiller of US2017030632.

The application describes a beer and beverage chilling assembly utilizing a tank filled with a cooling solution with a temperature of less than 30° F (less than -1 ˚C!). As explained in the application itself, “for many beer drinkers, the colder the beer, the better”, as long as the beer is not “frozen or slushy”. Slushy beer results from the release of CO2 gas and the decrease of pressure in the container as the beer is opened, causing the contents to freeze as the tab is broken or bottlecap popped. Therefore, the objective of the super chiller is to chill the beer as much as possible, but without the liquid freezing or causing a slush once opened. A rack in the tank supports cans and bottles which are submerged in the cooling solution, and an air bubbler or mechanical agitator prevents the cooling solution from freezing by circulating it around the tank.

Since the temperature of the cooling solution is controlled, it prevents the cans and bottles from ever reaching a freezing point of the beer, but chills them close it. Unfortunately, the application was abandoned before ever reaching grant – a rather bitter end to the super-chiller.

For those celebrating at their local watering hole, or for those lucky enough to have their own taps at home, you may be celebrating with a pint of draught beer. Depending on your selection of beverage, and/or bartender’s custom, the head of a freshly poured pint may be skimmed to remove excess foam. While this gives a neat-looking top to your drink, making for stellar presentation, it also serves to remove bitter compounds, and forms a protective layer preventing oxidation of, and loss of CO2 from, your drink.

However, it may be that using the same skimming-knife or other utensil repeatedly is seen as unhygienic. Patent EP2793658 considers a glass for providing automatic skimming, without the need for cutlery. The beer glass comprises a substantially cylindrical container for beer, wherein at least a part of the periphery of an opened side of the glass (i.e., the rim) extends in a plane at an angle relative to a support surface (i.e., the base), the glass characterized in that the angle is less than 3 degrees and amounts particularly to about 2.5 degrees. 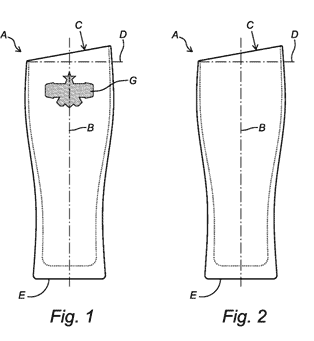 The bartender simply holds the glass at an angle and pulls enough beer such that it fills the glass to the top. Then, when the glass is placed back down onto the bar, the excess foam at the higher edge of the rim slides towards and off of the lower edge, coors-ing some of the foam to be skimmed but leaving a layer in the glass. Nifty.

Finally, if a stout or pilsner just isn’t potent enough for your taste, spirit-drinkers can let out a-sigh of relief (close enough). Pending application WO2021146056 considers methods and systems that process beer into an oxygen-stable, long shelf-life spirit. The process includes introducing oxygen into the beer, heating it to a temperature within a range, and allowing it to age at the temperature for a number of days. During this aging process (or session … anyone?), the beer transforms into an oxidized beer spirit. 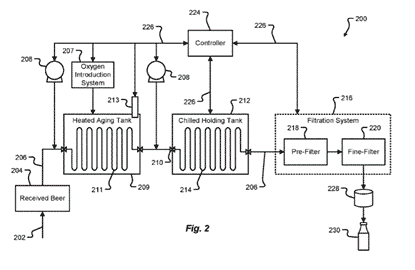 The beer spirit is cooled to room temperature and is then chilled to separate unwanted precipitate and byproducts. The spirit is then forced through at least one filter to remove the precipitate and provide a clear and filtered spirit having a complex taste and aroma profile – perfect for a beer-themed cocktail or sipping on ice. Just be sure not to drink it by the pint.

No matter what you reach for this National Beer Day, rest assured that there are plenty of inventions aimed at making the next one even better. Cheers to that!