When graphene was first isolated in 2004 by Andre Geim and Konstantin Novoselov at the University of Manchester, it sparked a flurry of interest and excitement which was later termed the ‘graphene gold rush’.

During the graphene gold rush, academics around the world published numerous papers on the synthesis, modification and application of graphene, and companies sprang up selling graphene products of varying quality.

In recent years, however, the intensity of academic and public interest in graphene appears to have receded, with news articles seemingly fewer and further between.

By reviewing data from the world of patents, this article sets out to determine how the development of graphene and related technologies is progressing, including whether graphene has lived up to the expectations of the graphene gold rush.

In order investigate global patent trends for graphene-related inventions, we carried out a search for published patent applications and granted patents having the term ‘graphene’ in any of the title, abstract and claims (referred to as the “T/A/C”). By searching according to the T/A/C, we are able to focus on documents in which the core of the invention likely involves graphene, rather than those in which graphene may simply be mentioned somewhere in the description. 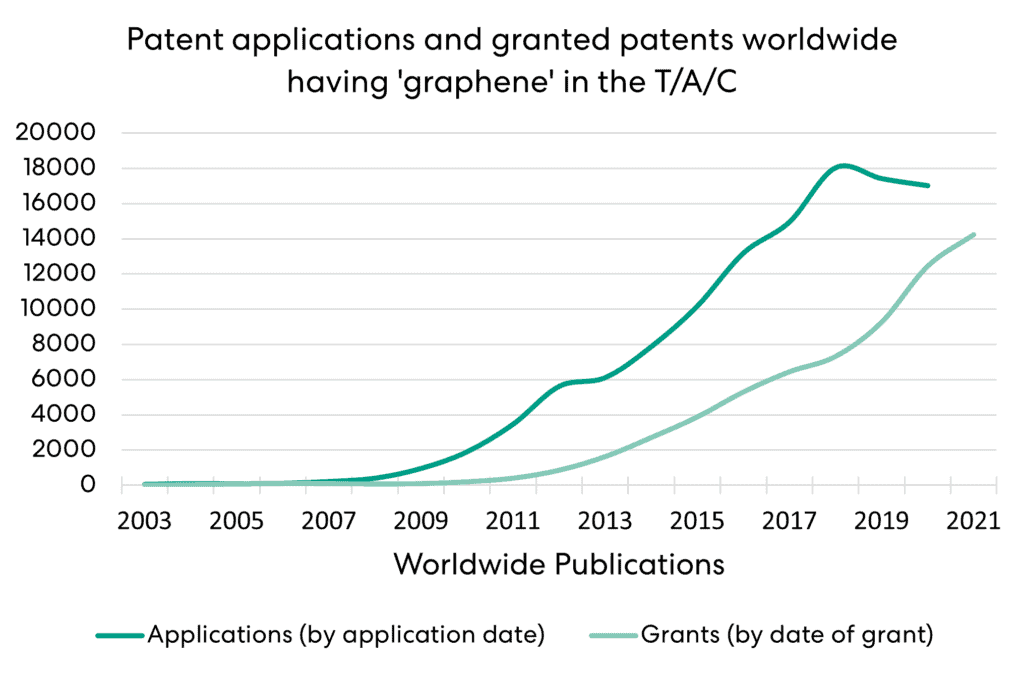 Figure 1: The number of patent applications worldwide and granted patents worldwide having the term ‘graphene’ in the T/A/C

Prior to 2008, there was relatively little patenting activity for graphene-related inventions, perhaps reflecting the time required for R&D activities to begin to bear fruit after graphene’s first isolation in 2004.

Between 2008 and 2012, the number of applications filed per year accelerated rapidly, before reaching a relative plateau in 2013 (perhaps reflecting a reduction in R&D spending following the 2007-2008 global financial crisis). Since 2014, the number of applications per year has grown steadily, reaching a peak in 2018 and falling marginally since then. The slow-down in filings does not therefore appear to be directly related to the Covid-19 pandemic.

As can be expected, there was a lag of around 3 years between 2008 and 2011 before the annual number of grants began to accelerate in a fashion similar to the application rate.

The annual number of grants has a similar but shallower gradient than the annual application rate, perhaps reflecting the time taken by patent offices to examine the applications and/or the proportion of applications which are refused or otherwise do not result in grant.

The annual number of grants appears to be increasing consistently year-by-year, reaching over 14,000 in 2021.

We therefore see a consistently strong global interest in graphene-related inventions. This suggests that the graphene gold rush has not yet ended, although it may have slowed down.

Considering now the applications and grants having ‘graphene’ in the T/A/C by jurisdiction, as shown in Figure 2, we have found that patent activity in China dominates the landscape, with the Chinese National Intellectual Property Administration (CNIPA, the Chinese Patent Office) handling more applications than the remaining IP5 offices (the five largest intellectual property offices in the world) combined. 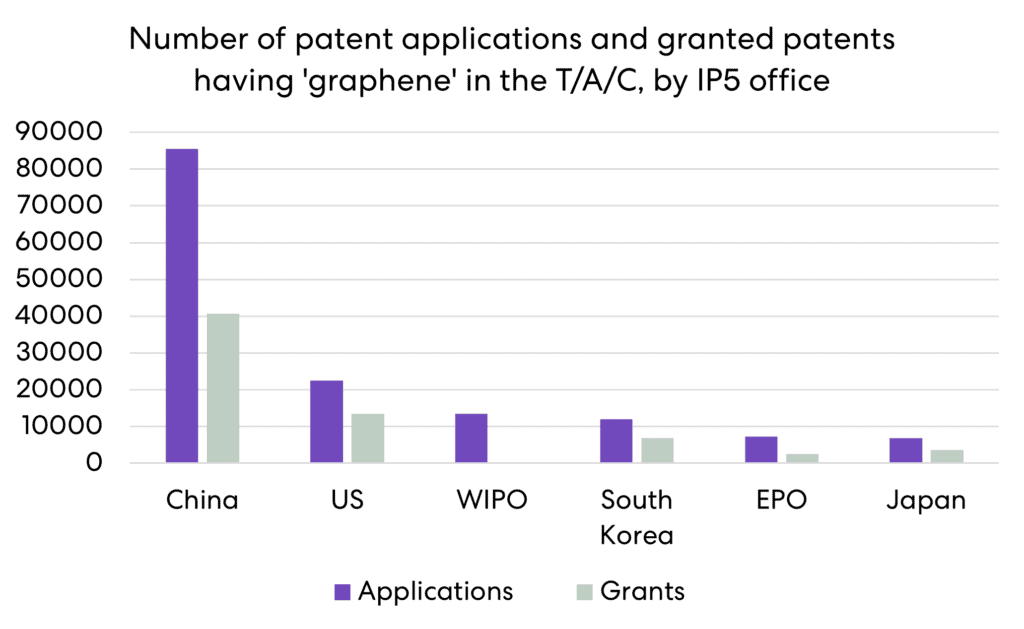 Figure 2: Number of patent applications and granted patents having ‘graphene’ in the T/A/C, by IP5 office

Given the vast number of applications filed in China, we drilled down into the filing jurisdictions of those patent families having Chinese members. The data shows that, of the graphene-related families worldwide, around 70%[1] do not have a single family member outside of China. The Chinese dominance in the global filing statistics is therefore driven primarily by the filing of domestic patent applications by Chinese applicants.

From the data on applications and grants by jurisdiction, we can also determine a rate of grant-to-date (i.e., the number grants over all time as a proportion of the number of applications over all time). The graph in Figure 3 shows a rate of grant-to-date for the IP5 offices, and, for context, the average grant rate for the year 2020 for each IP5 office[2]. It should be noted, however, that as not all applications will have reached a conclusion (e.g., grant or refusal), the data also reflects different processing speeds by the five offices. 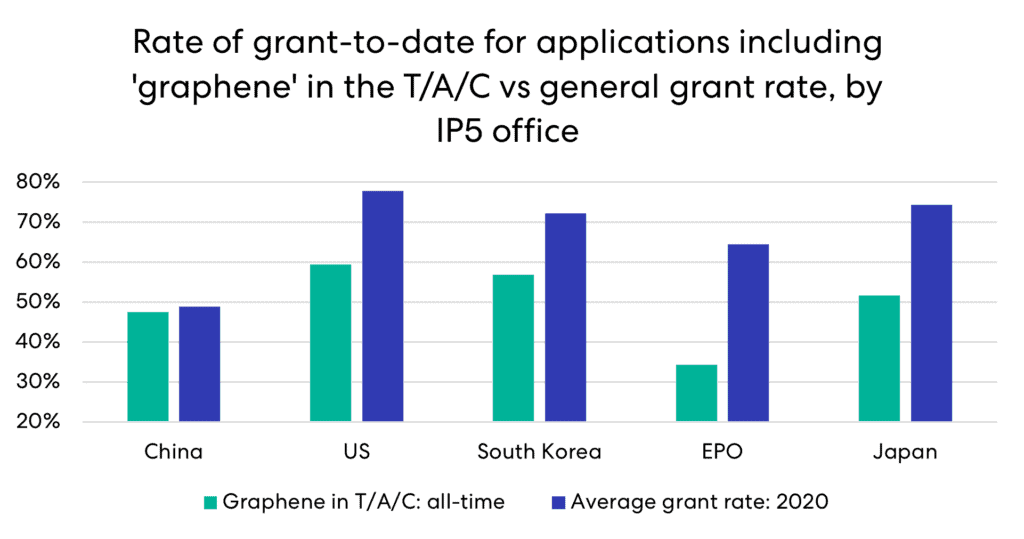 Figure 3: Rate of grant-to-date for applications including ‘graphene’ in the T/A/C vs general grant rate, by IP5 office

For graphene-related inventions, the US has the highest grant rate at 59% whilst Europe has the lowest at 34%, which is significantly lower than all other IP5 offices. For context, in 2020, the general grant rate before the USPTO was 78%, and 64% before the EPO. It therefore seems to be more difficult to achieve grant in graphene-related fields across the board, and particularly more difficult in Europe.

A possible contributing factor to the apparently low rate of grant-to-date before the EPO may be processing delays due to the EPO’s existing backlog and/or due to the effects of the pandemic being experienced more acutely at the EPO than at other IP5 offices.

The EPO also examines materials-related applications strictly, with an arguably greater emphasis on clarity and sufficiency of disclosure, and a requirement to provide evidence of an inventive step, as compared to jurisdictions such as the US. This highlights the importance of drafting applications destined for the EPO with European patentability requirements in mind.

By considering independent claims including the term ‘graphene’, we are able to determine whether graphene forms an essential part of the patented invention.

In Europe, the number of patents granted annually with ‘graphene’ in the T/A/C has increased steadily since 2012, but peaked in 2020 and has decreased by approximately 10% since. The number of granted patents with ‘graphene’ in an independent claim also increased steadily from 2012, albeit not as rapidly, reaching a plateau in 2018 and remaining there until 2020, with a slight decrease in 2021.

It appears that growth in Europe has stagnated in recent years, contrary to the global trend of continued growth as shown in purple and as discussed earlier. It is possible that this may reflect the effects of the pandemic in delaying processing and grant of patents in Europe. Additionally or alternatively, this may be related to the preferences of applicants worldwide and whether European jurisdictions are considered to be of importance to their activities. 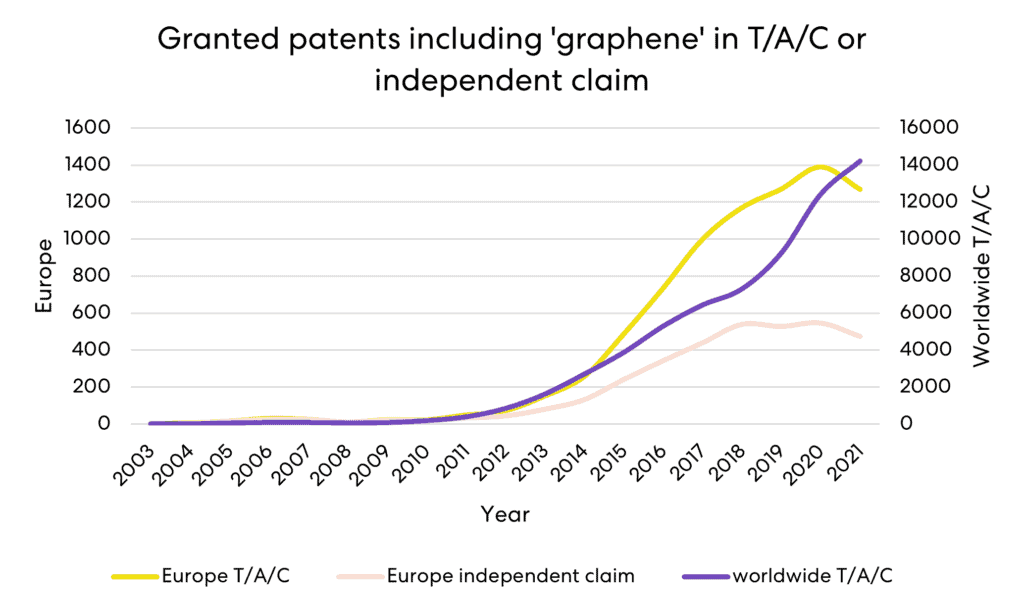 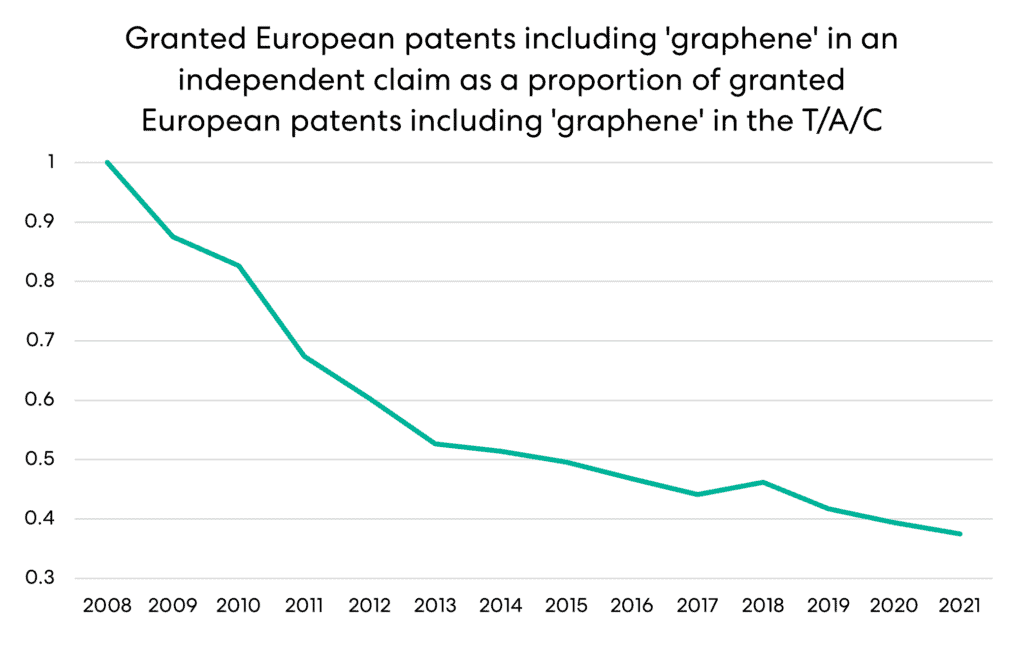 It is evident that since 2008, the proportion of granted European patents which include ‘graphene’ in an independent claim as a proportion of those including ‘graphene’ in the T/A/C has fallen every year bar one, from a proportion of exactly 1 in 2008, to 0.37 in 2021. Accordingly, those patents which mention graphene in any of the title, abstract and claims increasingly do not recite graphene in an independent claim. This suggests that graphene is increasingly becoming an inessential feature of patented graphene-related inventions, perhaps merely one of many possible ways of implementing an invention. 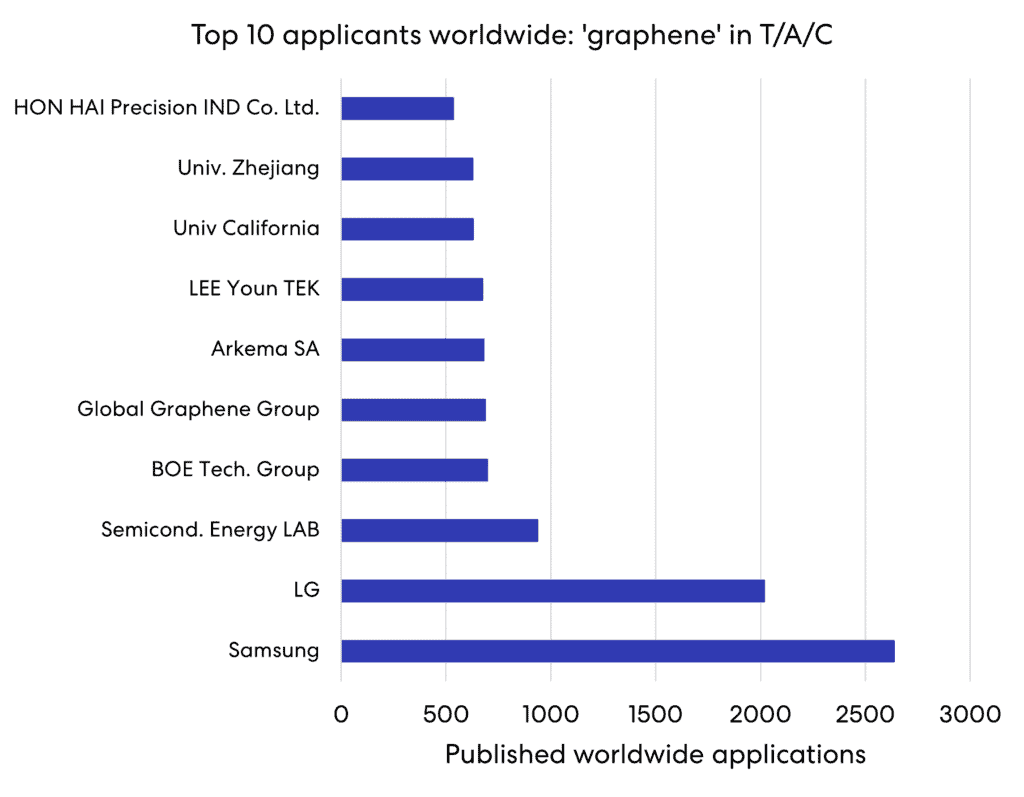 Figure 6: Top 10 applicants worldwide for patent applications including ‘graphene’ in the T/A/C

Samsung and LG are clearly the two largest filers by a significant margin, having a similar number of published applications as the remaining eight of the top 10 filers combined. Samsung has also filed 31% more graphene-related applications than LG.

Considering Europe in detail, Figure 7 shows the top 10 filers in Europe according to the same criteria – ‘graphene’ in the T/A/C over all time. 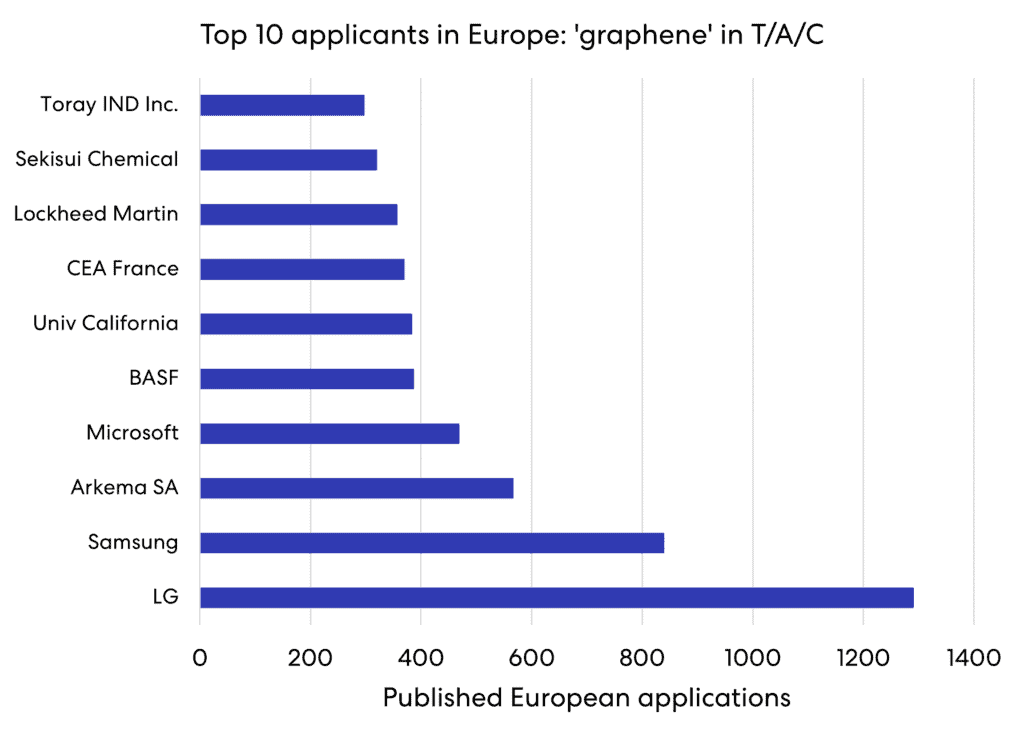 Figure 7: Top 10 applicants for European patent applications including ‘graphene’ in the T/A/C

Samsung and LG are again the largest filers. However, LG takes precedence over Samsung, with LG having filed over 50% more European applications relating to graphene than Samsung.

Further, the distribution of the top 10 applicants in Europe appears more flat and less extreme. This trend continues into the top 25, in which applicants ranked 11 to 25 have all filed a similar number of applications.

China is the major destination for filing activity, but applications filed in China tend not to have overseas family members. Samsung and LG file the most applications globally and in Europe.

Success rates for graphene-related applications in Europe appear to be lower than the remaining IP5 offices. This highlights the importance of engaging a specialist materials attorney when drafting and prosecuting a patent application before the EPO in this field, devising a targeted approach and taking into account the latest case law and best practice.

[1] This is an approximation based on the available English language abstracts of non-Latin-based territories (e.g., CN, JP, KR, TW, RU), as machine translated claims from these territories can mis-translate ‘carbon’ and ‘graphite’ into ‘graphene’.

This is for general information only and does not constitute legal advice. Should you require advice on this or any other topic then please contact hlk@hlk-ip.com or your usual HLK advisor.