This year, England and Wales host the Cricket World Cup, the world’s biggest cricketing carnival. It is surely set to be an exciting few weeks as ten teams battle it out to claim the coveted trophy, and it will bring a fantastic atmosphere to the British sporting summer. Cricket is the world’s second largest sport and has always tended to attract new technology and innovation, having had multiple game formats and rule changes.

In 2001, cricket was the first sport to implement “HawkEye” (GB2357207A), the ball-tracking technology which uses multiple cameras to track and predict the trajectory of the ball. This helps umpires to see whether a batsman is deemed to have been out “Leg Before Wicket (LBW)” (i.e. whether the ball would have hit the stumps if it had not hit the batsman).

There are other inventions which help umpires, such as the “Snickometer” (GB2358755B), in which the audio signal of a recorded TV match broadcast is analysed to see whether a batsman might have hit, or “edged” the ball with the bat, before being caught by a fielder. WO2009/094728A1 tries to solve the same problem in a different, if maybe less practical way, by implementing contact sensors in the bat. When the ball makes contact with the bat, a signal is provided to the umpire.

More than in most other sports, the weather and pitch conditions have a huge influence on a particular game of cricket, affecting how the ball moves through the air and off the ground. Perhaps it would help then, if players were able to train for all conditions? US2006/0287024 provides a system for simulating a variety of cricket conditions. This system allows temperature, humidity, wind and ball conditions to be varied. It even replicates crowd noises to simulate distractions, helping players to “build mental fortitude”!

Cricket balls generally have a cork core, surrounded by leather covers stitched together at a central seam. A bowler uses his or her skill and the wear of the ball, to make the ball move, or “swing”, through the air and spin off the pitch. GB2091110A shows a training ball with a raised seam which aims to help a batsman train for a swinging ball. In WO2016/034998A1, another training ball has dimples, apertures and eccentric weight to provide unpredictable swing and bounce to a batsman. There are also “smart balls” available, such as that in GB2538496A, which have sensors within the cricket ball to measure its speed and spin, allowing data to be collected to improve player performance.

A cricket bat has a handle, attached to a blade which is used to hit the ball. Players have long tried to use “alternative” cricket bats to try and gain an advantage, with Australian Dennis Lillee famously using an aluminium cricket bat in 1979, instead of the traditional willow. In 2010, Matthew Hayden introduced the world to the Mongoose cricket bat (US2011/0143871A1), which had a short and thick blade and a long handle, having a higher handle to blade ratio than conventional bats. The manufacturers claimed that the bat had a larger sweet spot, allowing the ball to be hit further than normal. However, this bat only helped if the batsman wanted to play recklessly and so didn’t seem to catch on! 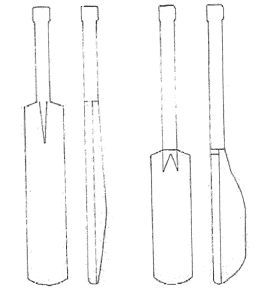 Other “odd” bats include that in US2013/0337947A1, which has a handle whose axis is offset from the striking surface of the blade, apparently improving the balance of the bat. The inventors in US2016/0158614A1 have sought to “optimise” the shape of a cricket bat, by chamfering the edges to try and reduce the chance of the batsman edging the ball and being caught out.

It remains to be seen whether we will be stumped by any of these innovations at this year’s World Cup!