‘Win Sunday, sell Monday’. This snappy statement highlighted the main motivations for automotive manufacturers electing to compete in motorsport during the mid-20th century. The idea was simple; the better a manufacturer performed on the track, the more likely consumers would buy cars from them. This mantra formed the basis for competitive motorsport that has created several exhilarating moments in competitions such as Formula 1 over the past few decades.

Fast-forward to the 21st century, environmental concerns are now at the forefront of the public eye, and rightly so. There has been concern about motorsport’s carbon footprint. In response to this growing criticism, Formula E; an all-new, all-electric version of Formula 1, was created.

Coincidentally, a raft of governments have since implemented legislation which intends to end to the sale of internal combustion engine (ICE) vehicles (e.g. petrol and diesel) within the next 15 years. Battery electric vehicles (BEVs) are the heir apparent to the throne of preferred propulsion method for passenger cars. As such, prominent automotive manufacturers have turned to Formula E to develop and test novel BEV technology, pre-empting the extensive adoption of BEVs by consumers, as ICE vehicles are frozen out. It would appear that old adage has taken on a new meaning in the context of Formula E.

This article takes a look at patents related to some of the technology prominent in Formula E, which ordinary drivers like you and I may notice in our cars sooner rather than later.

Regenerative braking has been around for a relatively long period of time, and it has already shown up on passenger cars. However this technology is so essential to the operation of electric vehicles that it would be unseemly not to at least briefly discuss it. 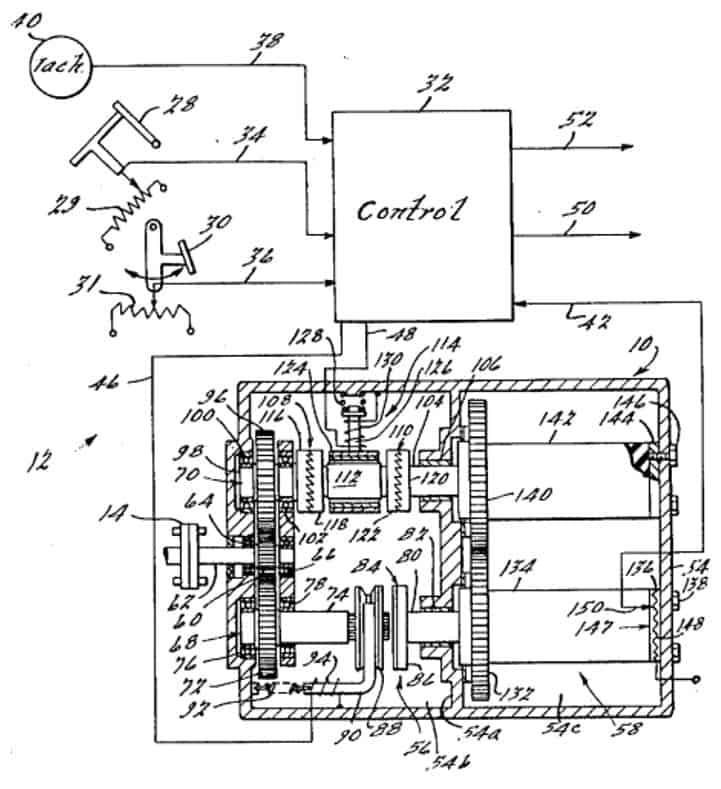 US Patent 4,246,988 is an example of an early regenerative braking system for a vehicle (illustrated by Figure 1). Regenerative braking devices such as these include a transmission assembly capable of capturing kinetic energy from a vehicle as it slows down, and an energy storage assembly (such as a rotating flywheel or a battery) for storing the captured energy for re-use.

A more advanced system (FlybridTM) using the same governing principle as this was first introduced to F1 in the 2009 season, and these systems have since become a mainstay for improving energy efficiency in several motorsport competitions, including Formula E. Undoubtedly, the presence of this technology in Formula E will yield greater improvements that will allow for higher and higher levels of energy recuperation that can eventually be used to further increase the range of BEVs.

Range and charge anxiety are worries plaguing the minds of many early adopters of electric vehicles. Consumers have grown weary of unfurling charging cables from their boot, or venturing too far from home, for fear of not having access to charging stations on longer trips to more remote destinations. Fortunately, Formula E seems to be on the case! 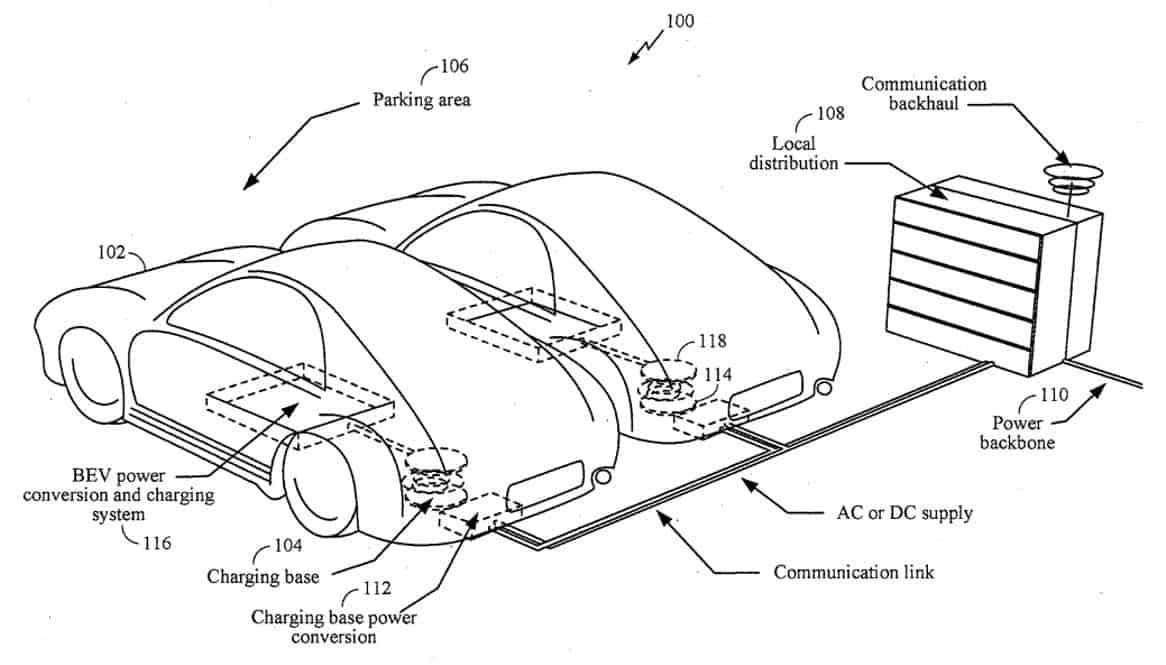 US Patent No. 2011/285349 (illustrated by Figure 2) provides a wireless charging solution where all a driver is required to do is park their vehicle over a charging pad and walk away! Sensors may detect when a vehicle is parked in the charging zone. Then, working under the principles of Faraday’s law, electromagnetic induction is used to transfer energy from a transmitting pad in the ground to a receiving pad placed on the bottom of a vehicle.

The original applicant for this patent was the same organization responsible for Qualcomm Halo, the wireless charging technology that is used to charge Formula E safety cars at a moment’s notice. Officials won’t have time to plug-in or unplug a car when they need to get onto the track urgently after all.

Wireless charging has massive potential to improve the charging experience for the average consumer. One of the most exciting applications of this technology is its potential implementation into wireless charging roads. Trials have already taken place to assess the feasibility of constructing roads that can charge electric vehicles as they drive over them. Figure 3 shows a road with inductive pads capable of charging a vehicle in motion.[1] No more worries about finding a place to plug in! 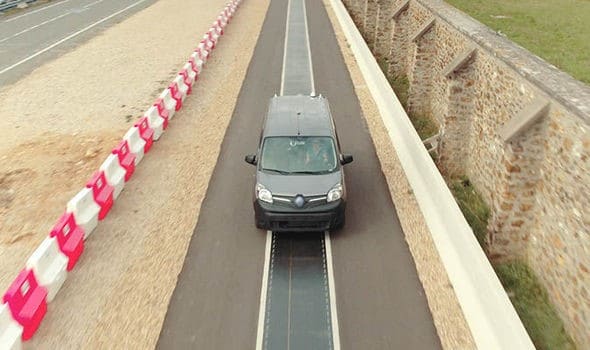 Safety concerns surrounding batteries are considered a factor hindering their wide-scale adoption. Historically, lithium-ion batteries, one of the most established electric vehicle battery chemistries, have been particularly susceptible to a phenomenon called thermal runaway. Each cell in a lithium-ion battery contains a flammable liquid electrolyte. If the cell short-circuits, the electrolyte can combust and the pressure within the cell will rapidly increase until the cell vents the flammable electrolyte. Temperatures within the ruptured cell can rise to above 1,000°C, causing fires or even explosions. 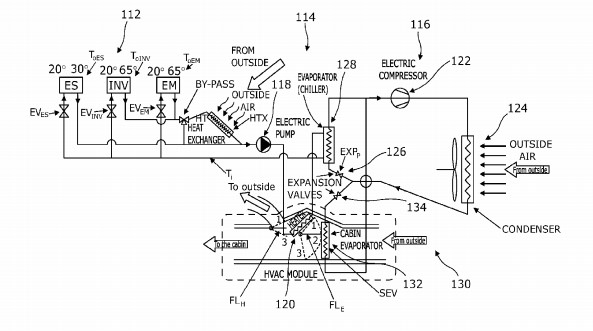 While the specific battery chemistry used in Formula E is a closely guarded trade secret, these high-capacity batteries are still at risk of thermal runaway, causing concern for teams involved.

Patent GB2555475, filed by Williams Advanced Engineering, aims to solve this by filing a cooling system with an electric pump, an electric compressor and a cabin chiller. The pump moves fluid around a first loop to cool the battery before passing the fluid through a cabin heater that extracts heat energy from the fluid. In other words, this system closely manages the temperature of a vehicle battery, recycling any heat produced by the battery for use as heating for passengers.

Formula E is a culmination of the cutting edge of electric vehicle technology. It is certain that it will play a huge role in increasing the appeal and practicality of electric passenger cars.