At this point in the year, we are all looking forward to the longer, lighter summer evenings that arrive with the change to British Summer Time. Unfortunately, this change requires us to wake up an hour earlier than we have grown used to during the winter months. Thankfully, there are many different types of alarm clock to help us with this.

The concept of the alarm clock dates back at least as far as Ancient Greece. It is thought that the first alarm clock was constructed by the philosopher Plato in the fourth century BCE. This was a water clock which was set to chime once in the morning, and then again in the early evening, to signal the beginning of a lecture.

Another example of an early alarm clock was the striking clock devised by Buddhist monk Yi Xing in the year 725. His clock relied on water wheels to turn its gears and featured gongs which struck at fixed intervals

The first adjustable alarm clock, able to be set by the user to chime at a time of their choosing, was patented by Frenchman Antoine Redier in 1847 and, since then, a huge number of variations have been patented.

For those who find themselves startled by their alarm sound in the mornings, US Patent US4407585 describes an alarm clock that, instead of providing an audible sound, releases an aromatic liquid which fills the room with a pleasant smell to wake the sleeper.

US patent US2007008825 describes a self-moving alarm clock which, as well as providing an audible alarm, has a mechanism which allows it to roll itself around. When the alarm rings, the user is required to locate, chase, pick up and then hold onto the housing of the clock, during which time they are vigorously shaken awake whilst trying to turn off the alarm. 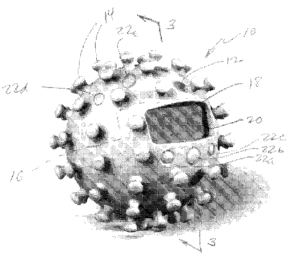 Finally, US patent US256265 attempts to provide a solution for people who find they have become so accustomed to the sound of their alarm that it no longer wakes them up. It describes a frame that hangs over the head of the sleeper and is released at the desired time, colliding with their face.

So for those of us not lucky enough to be “morning people”, there is no shortage of quirky, and even annoying, solutions to help us out of bed.