I am not the first, nor will I be the last to claim that the Olympics Games are greatest spectacle on Earth! Unfortunately, the greatest public health crisis in a century has postponed the Olympics until the next year. The reasoning for postponement is more than justified in my opinion, nevertheless it feels like both athletes and spectators have been robbed of a truly unique experience.

Maybe you like to watch abnormally toned people sprint down a track in a matter of seconds. Perhaps you like to become over-invested in a sport you’d never heard of until you catch their highlights on BBC 2. Whatever your curiosity may be, in this article, I try to at least partially fill the void by taking a look at some intellectual property related to athletics and the Olympics!

The short distance sprinting events are arguably the centrepiece of the Olympics. For example, over 20 million people tuned in to watch Usain Bolt charge to victory at the London Olympics in 2012.[1] I am sure all of us at some point have ran as fast as we can, arms flailing, trying to channel our inner Bolt. However, perfecting the art of sprinting takes a lot of technical training. An important aspect of this is optimising specific muscles for different parts of the race. 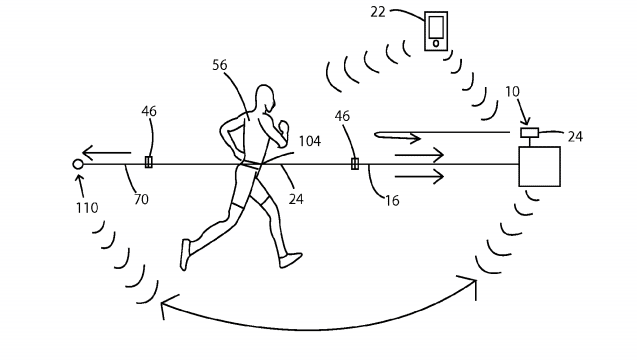 One of the latest innovations in this respect is provided by patent US2014323270 (illustrated by figure 1). This patent describes equipment which can pull the sprinter forward to strengthen the hip flexor muscles (for maintaining top speed) as well as pull them back to strengthen the quadriceps (for acceleration at the start of the race). This equipment pulls the sprinter forward or backward using a cable, cable winder and motor arrangement. The system can also connect wirelessly to a mobile phone/computer to track performance. Looks like we are going see a few more records broken sooner rather than later!

The swimming events are a staple of the Olympics, where athletes from around the world look for any tiny advantage to best their opponents by the tiniest margins.

Athletes competing in the 2008 Beijing Olympics took this sentiment to the next level. At the 2008 games, new world records were set a remarkable 25 times and new Olympic records were set 65 times![2] What was the cause of this? Did the athletes at these games develop fins? As interesting (or disturbing) as that evolution may have been, the source of this unprecedented improvement can be found in patent GB2444803 (illustrated by figure 2). 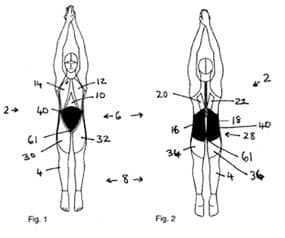 This patent provides a swimsuit that has an inner core layer of elastic fabric bonded to another outer layer of material, such that the swimsuit fits very tight to the body of a swimmer. Due to this much tighter fit, water can’t get between the swimsuit and the body of the swimmer as easily. As a result, drag on the swimmer is greatly reduced, meaning that they can swim faster (as they aren’t swimming against as much resistance). Also, such a tight fit reduces muscle vibration and hence reduces muscle fatigue.

This swimsuit provided such a huge advantage, that full body swimsuits were subsequently banned by FINA, the world governing body of swimming.

No matter what the sport, if an athlete wants to stand any chance of qualifying for and performing well at the Olympics, they will have to spend months on end training. This training will no doubt involve all sorts of exercise in the gym or on a track. To get the best out of their time in the gym/on the track, athletes invest thousands on the best equipment. The most invaluable equipment for enabling effective training are sports shoes.

Nike were part of a revolution related to the shape and materials used in the making of athletics shoes. In patent US3793750 (filed in 1972, illustrated in figure 3), they provided a shoe with an upper (main body) of a porous fabric layer construction and a sole with polygon shaped studs.

The porous fabric upper greatly reduced the weight of athletic shoes made at the time (roughly halved the weight of a conventional leather athletics shoes). It also provided greater comfort and enabled use in wet weather without damage to the shoe. Meanwhile, the polygon shaped studs provided gripping edges that gave greatly improved traction while running. 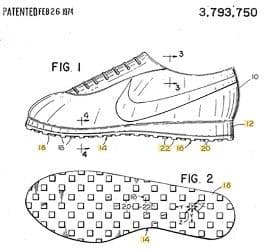 This design helped athletes train faster, longer and more safely. There is no doubt that this design laid the basis for many other innovations related to athletics shoes, leading to improved performances at the Olympic games we all love to watch.

I know that reading about the Olympics is hardly a substitute for the real thing. I just hope that this article has got you excited for when they do go ahead. I know I am! In the meantime, please stay safe.

Bonus fact: The designer of the Nike swoosh trademark sold the design to Nike for $35. Now it is worth $26 billion![3] Good business from Nike.