There has been a lot of talk over the last year about the European Patent Office’s (EPO’s) “two-dimensions” for assessing AI based inventions. If you’re not familiar with the two-dimensions, then the EPO has decreed that AI Inventions may be deemed technical, and therefore patent eligible, in two ways (or “dimensions”). The two dimensions are i) by virtue of being adapted to a specific technical implementation, and ii) by adaption to a field of technology.

The Invention Disclosures (IvDs) that come across my desk tend to fall into the following categories: 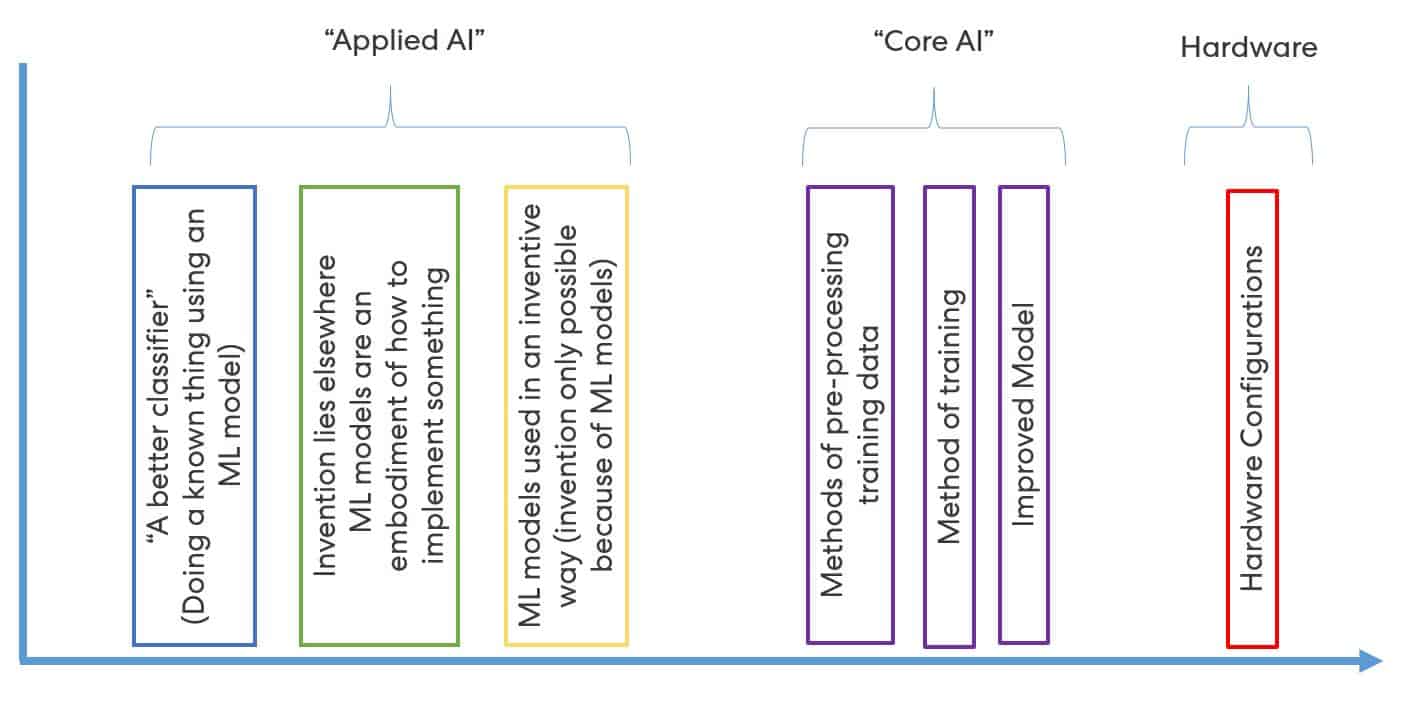 The x-axis of this figure might be thought of as “degree of abstraction from the processing of the computer” with runtime inventions lying toward the left and hardware inventions to the right. It also (coincidentally) corresponds to likely degree of complexity to the patent attorney writing the application, with more complex applications also tending towards the right of the figure.

At the far left of the figure sit the Applied-AI inventions. These are where the inventor hasn’t advanced the field of AI, rather the invention lies (as the name would suggest) in the manner in which a known AI algorithm is used.

The blue box represents inventions that amount to “a better classifier”. For example, the use of a neural network trained to predict a particular parameter from a set of input features. Classifying images as containing people or dogs based on a corpus of images would be an example of this kind of invention.

The green box represents inventions where AI is incidental to the invention, and merely one way that the invention might be realised. For example, the invention might involve a step of “predicting”, in which case the predictions may be made using a machine learning model (but might also be performed using other methods). For Inventions of this type, AI is an implementation detail, but not the main invention.

The yellow box represents inventions that, whilst not representing improvements to fundamental AI algorithms, are only possible because of the advent of AI. Examples of this type include algorithms for merging pictures; photo filters being a good example.

Finally, to the far right, the red box represents hardware inventions. These include AI algorithms specifically adapted to particular hardware configurations. In this sense, the design of the algorithm may be motivated by technical considerations of the internal functioning of the computer.

EPO Examiners tend to treat these groups as follows: 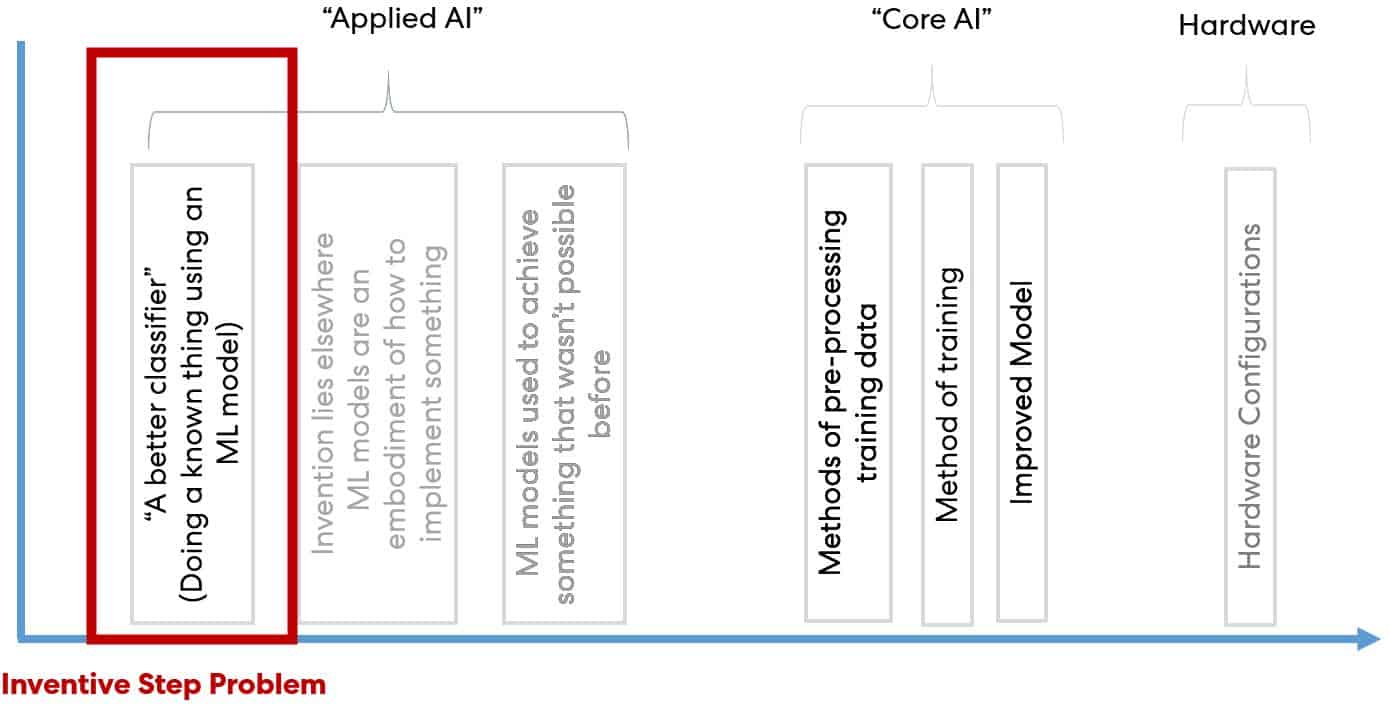 As you might expect, the far-left group are likely to encounter Inventive Step objections. Gone are the days when merely applying AI in a straightforward manner to a known problem is considered inventive. These types of inventions are not considered unpatentable subject matter per se but they may be considered obvious. 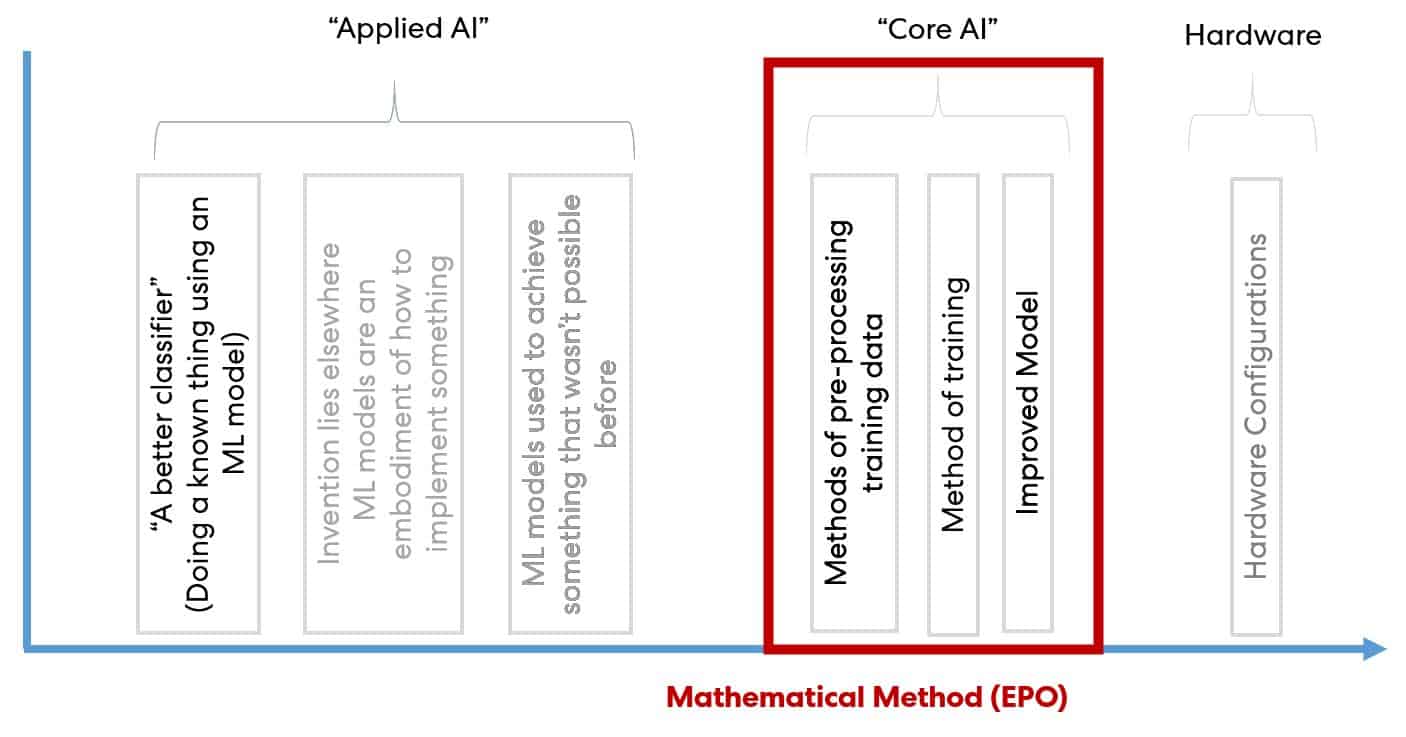 The Core-AI group encounter a different type of objection, as the EPO often consider these data agnostic processes to represent mathematical methods. As such they are as a general guide more likely to encounter unpatentable subject matter objections.

The sweet spots are therefore to be found in the remaining Applied-AI and Hardware invention categories. These are the areas generally considered by the EPO as subject matter not falling within the EPO’s list of exclusions. 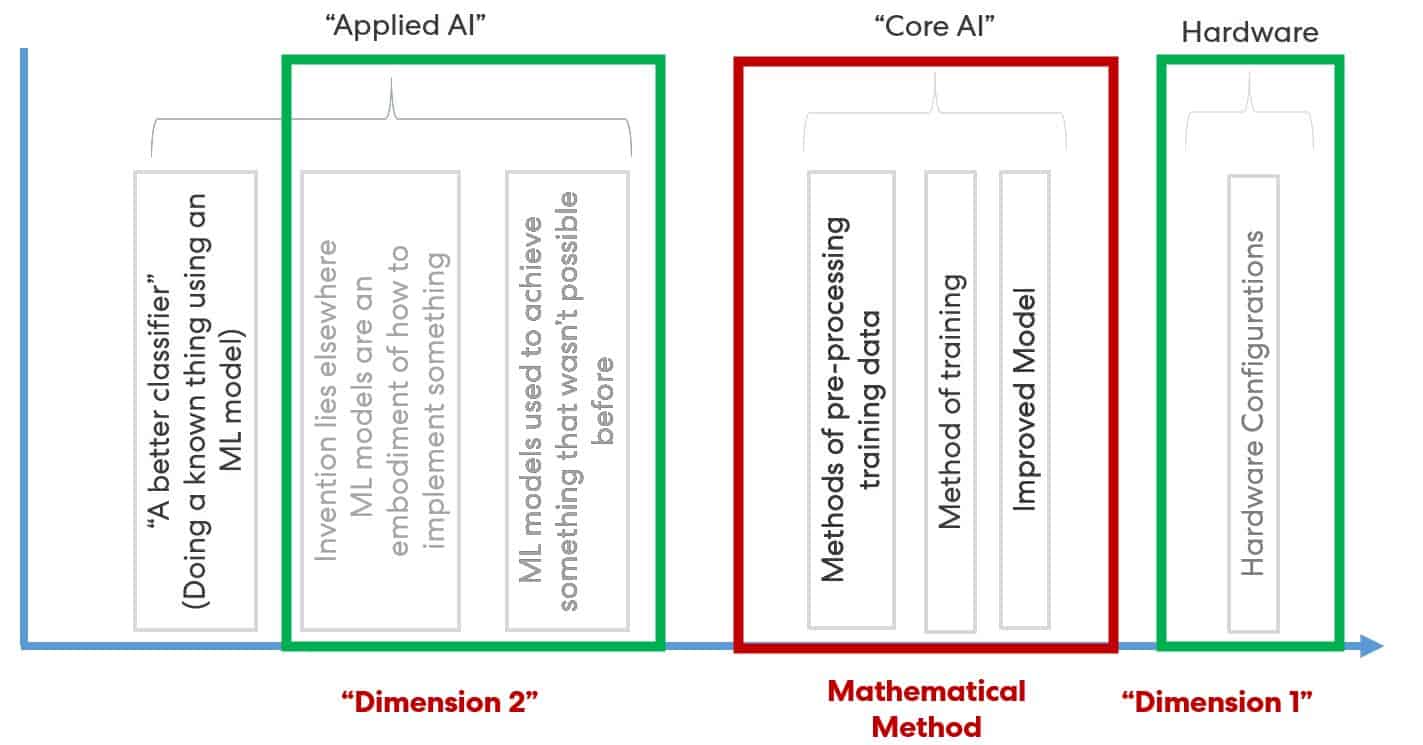 Thus, the “Invention Disclosure Spectrum”, as I affectionately call it, represents a quick and intuitive way to analyse how the EPO might consider the subject matter of an application during Examination.

I finish by noting that if you find yourself with a Core-AI invention on your desk, all is not lost. These just require a little more care and attention in order to position them correctly for submission to the EPO.